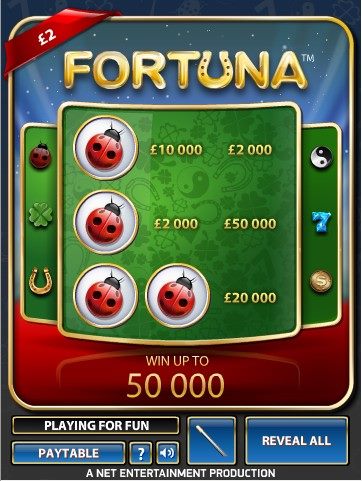 Fortune is a scratch card game from the amazing portfolio of Net Entertainment. It is a pure game of luck that allows players to put their luck to the test. It is a very straightforward scratch card game, as players will buy a card and start scratching to match money amounts so they can earn rewards. The game has amazing visuals and scratching methods that allow players to enjoy a visually satisfying experience. It also allows the players to change the symbols they scratch and the scratching tool, which adds to the fun and excitement of the game. Since the game is powered by Net Ent, it can be enjoyed at any of the online casinos that run on a Net Ent powered software and offer a Net Ent powered gaming portfolio.

At the very bottom, players will see the control panel of the game with blue buttons. These buttons include the Buy Game button, Paytable button and the button to change the scratching tool that the players will use to scratch the card. The card itself is in the middle of the screen and it offers players nine different symbols to scratch so they can reveal and match money amount to claim a payout.
At the right and the left side of the card, players will see different symbols. The players will choose the symbols they want that will appear on the scratch card itself. There are six different symbols available. These symbols are the lady bug, a green leaf, a golden horseshoe, a bleu seven, the ying yang symbol and a golden coin with the dollar sign on it. At the bottom, players will see the scratching tool. If they click on it, they will be able to choose one of the three available tool. These tools include a magic wand, a green witch tool and a wooden scratching tool.
The Game Play

The players will begin by buying a ticket by clicking on Buy Game. This would cost the players 2 credits, which is the fixed price of the game. After they purchase the ticket, they will be able to choose the kind of symbols they want to appear on the ticket and the scratching tool. All of this will not affect the game play or the chances of winning but it helps players enjoy a visually entertaining experience during the game play.

After players choose the tool and the symbols, they will start clicking on the symbols with the tools that they have chosen. This will cause the symbol to disappear in order to reveal the money amount that lies underneath the symbol. The players who succeed in matching three money amounts will be able to claim that money amount. Players will then have to purchase another card game so they can play another round.