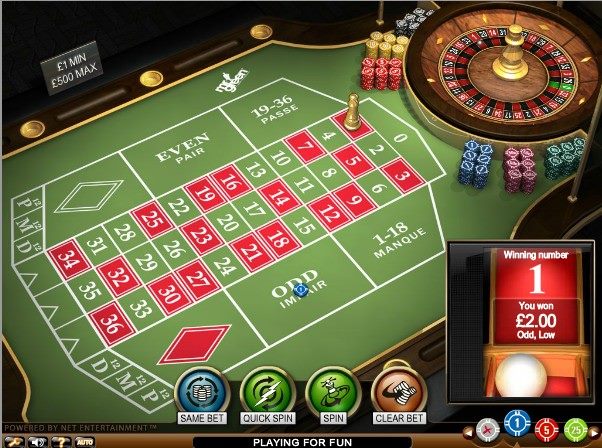 French Roulette has the same rules and the same game play as the European Roulette but with a very distinctive layout for the table. It has the same layout that can be found at Monte Carlo based casinos. It has thirty-seven numbers as it does not have the 00 that exists at the American Roulette.

Roulette is one of the most commonly known casino games. The roulette table is the ultimate form of gambling as it offers players the chance to place wagers and test their luck as the game does not require any skill or knowledge and the outcome is 100% random. This game is a French Roulette game which is basically the same as European roulette. The real difference is apparent between this game and American roulette as American roulette has worse odds as it has an extra number, the 00 while French roulette only has one casino number, the single zero “0”. This game is from the gaming portfolio of Net Entertainment which can be enjoyed at several top casinos such as Mr. Green Casino.

Since the game is powered by Net Entertainment, the players can expect wonderful and realistic graphics and digital sounds that mimics the casino background noise. All of this enables the players to enjoy a very entertaining and a fun roulette gambling experience and it makes them feel as they are sitting at the biggest Monte Carlo roulette based casinos.

Starting the Game and Placing Wagers

The game will start with the players as they place their wanted wagers. The players will place these wagers at the wagering area that can be found at the middle of the screen. The players will first choose a chip size and then use that chip in order to place the wagers on the numbers or the different bets that the players would like to wager on. The available chip sizes include 1, 5, 10, 25 and 100. Players will also notice a chip that has no value, this chip is used to delete any wagers that players want to remove.

The wagers available at the wagering area resemble the wagers that can be found at any land based or online roulette game. These wagers include straight number bets where players will wager on specific numbers. There are also red and black bets, odd and even bets, first half and second half bets, first 1/3, second 1/3 and last third bets alongside other roulette wagers.

The game starts by placing the wagers as mentioned above. After the wagers are placed, the players will click on Spin in order to spin the roulette wheel and ball. The ball will keep spinning until it lands on a number which is the winning number. This number will be highlighted with the doll at the wagering area and the game will pay out the players if they are eligible for payouts. After that, another round will begin and players will place wagers and so on.

The game offers players the chance to view the history of the wheel to see the hot and cold numbers. This would help them place wagers.