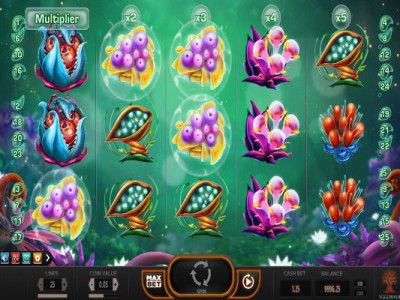 Fruitoids is one of the latest inventions of Yggdrasil Gaming, although the game is entitled Fruitoids, which might give players an idea that all of the game is themed around classic fruits, it is not. The game takes players to an exotic land that is filled with exotic and out-of-this-world fruits, and this is why the game is entitled Fruitoids. Of course, since the game is brought to players from Yggdrasil Gaming, it goes without saying that the game is presented in high quality graphics accompanied by great sounds. That is not all, as players can also expect to find plenty of winning chances, bonuses and special icons.

Fruitoids is a 5 reeled slot by Yggdrasil Gaming that takes players on a fun ride, like none other, into an exotic planet and lands where they will find exotic and rewarding fruits that have a lot to offer to them. The slot has 25 fixed lines through which players will earn many payouts after they place their bets. The game is fun and easy to play, thanks to Yggdrasil Gaming’s smooth game play and the control panel that is self-explanatory that makes it quite easy, even for novice online players to control. If all of that is to your liking, you will be glad to know that you can try out this wonderful game right here for free with endless demo credits. This will give you an idea on what the game has to give before you place real bets on the game.

Fruitoids is a Yggdrasil Gaming slot machine that has quite an entertaining and an exotic theme. Let’s break out the title of the game. For starters, there is the Fruit part, which shows the game might have a classic theme, that is all about fruits. As for the second part, “oids”, it shows the other face of the game, as these fruits are not cherries and lemons, they are fruits from exotic far away planets and lands. This is why all of the symbols that are going to be appearing for players across the lines of the game and its reels include exotic fruits with strange looking leaves that look as tasty as they are rewarding. As usual, under the set of exotic reels and fruits, players will find the control panel that will give them every option they need to control the game play.

The game’s betting range is created as a result of the coin size only, as the number of lines is fixed at 25. The betting range resulting from that varies between 0.08 and 50 credits.