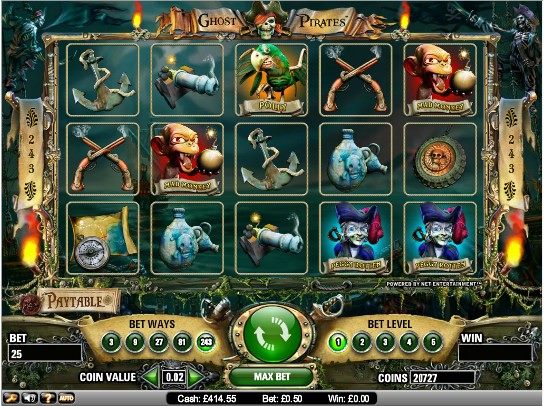 Ghost Pirates mixes two themes together, pirates and ghosts which creates one heck of a scary and a thrilling video slot machine. This video slot is powered by Net Ent. It has five spinning non-progressive reels and 243 paylines. It has wilds, scatters and a jackpot that is worth 3,750 alongside a great collection of bonus rounds.

Ghost Pirates is a very exciting video slot that presents players with a very unique theme. In fact, the game mixes two of the most popular themes together, it mixes pirates with ghosts and it gives players, Ghost Pirates which is the reason behind the name of the game. This is why players who like ghosts and pirates will surely enjoy this unique themed video slot machine. The game has the power of Net Ent behind it which means two things. The first thing is that the game play is exciting and that it is filled with amazingly captivating visuals and graphics and sound effects that are accompanied by a number of bonus rounds and symbols. The second thing is that the game can be enjoyed here for free or at Mr. Green casino among other casinos for real cash.

The unique theme of the game dominates the entire game. This includes the symbols of the game, the soundtrack in the background as well as the design of the game itself. The game is also presented in a very unique setup as it has 5 reels but no paylines. Instead of paylines, the game offers players 243 ways to win which is much better and more rewarding.

The symbols of the slot’s reels include golden skull coins, pirate weapons, ghost pirates, a treasure chest, a map, a compass, a parrot and a monkey with a bomb among other symbols. The design of the game is pirate themed as well including the control panel that is found under the game’s reels, it is where players will place their wagers.

In order for players to spin the reels, they will have to place a wager or else, they will place the same bet that they placed in the round before. Players will go through different options so they can form their wager. This includes the bet ways as players will choose the number of ways they want to place bets on. These numbers include 3, 9, 27, 81 and 243 ways. Players will also choose the value of the coin they want to use which varies between 0.01 & 0.50. The last option is the betting level as the game has 5 different betting levels.

Players can view these bonus rounds and special features that the game has to offer by clicking on the Paytable. The treasure chest is the scatter symbol which rewards players instantly with scatter rewards as well as free spins, the rewards and the free spins depend entirely on the number of ways activated by players. The game also has a wild symbol which is the pirate skull. This symbol can substitute for any symbol in order to help players in achieving a winning combination to earn a reward.