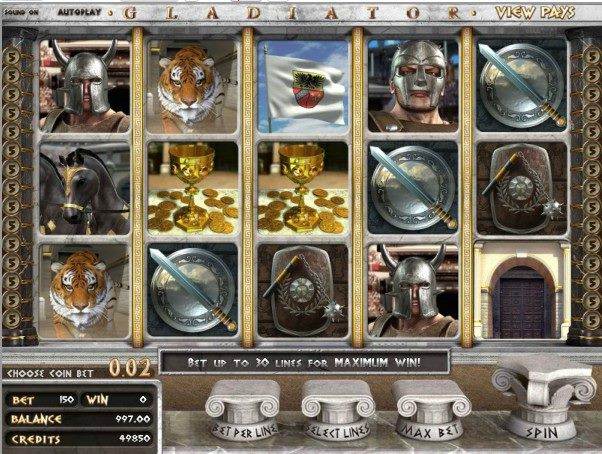 Gladiator is a slot machine that is developed by Betsoft. It is clear from the name of the slot machine that it is themed around the great hit movie, Gladiator. It is a five-reeled game with thirty paylines like most Betsoft slot machines. It is a video slot machine that has two different wild symbols and one scatter symbol that gives players scatter payouts. It has many features and bonus rounds that are very lucrative for players.

Gladiator is an awesome 3D video slot from the amazing 3D collection of video slots that is powered by Betsoft Gaming. This game allows players to embark on a wild journey as they relive the story of the army general who was betrayed and turned slave who then tries to go back to Rome in order to take vengeance from the king’s son. It is the story of the movie Gladiator that we all saw and loved. This game is themed around that fantastic movie. This is why all of the symbols and the design of the game are inspired by the movie and the characters of the movie. Also players will enjoy a great soundtrack that runs in the background as they enjoy spinning the game’s reels. They will also enjoy an intro that will lead them into the game.

The entire game is themed around that movie, this includes the symbols on its lines and reels, the control panel’s buttons, the design and the interface. Starting with the setup of the game, it is presented to players in 5 reels and 30 lines. These reels are located in a Roman setting while having the control panel buttons coming in the form of column heads from the ancient Roman temples and buildings. This control panel is where players will place max bet, choose their bets and spin the reels and other settings.

As for the game’s symbols, they include the Gladiator himself, the coliseum, a flag, a sword, a shield, a helm, a wooden door alongside other symbols. These symbols will become animated symbols when they are on an activated line that achieved a winning combo. At the bottom left side, players will see different cells that contain the balance of the players, the bet, the credits. On the top right, players will find the paytable that will show players all of the different line payouts and bonus features that the game has to offer.

Players will place their wagers on this video slot by going through three variables. These variables include the value of the coin used to place wagers. The values include 0.05, 0.10, 0.50 and 1. Players will also choose a number of coins on each line they activated and lastly, they will choose a number of lines between 1 and 30. All of this creates a wagering range that varies between 0.05 and 150 credits per each single spin on Gladiator video slot.

There are many bonus symbols and special features that the game holds. The coliseum is a scatter symbol that gives out pretty generous scattered payouts. The door is a bonus symbol, it triggered a bonus round if players get three of these symbols on the reels. Another bonus round is called Gladiator Smash Wild Reed which is triggered when players get the gladiator symbol on the 3rd reel.