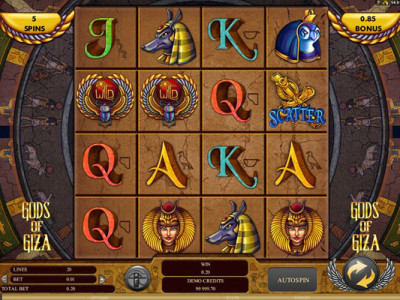 Welcome to the Ancient Egyptian civilization, a civilization that was globally known for its great fortunes and golden treasures to an extent that the kings were buried with their golden fortunes. Get ready to travel back in time to that civilization so you can enjoy a historical gaming adventure that is full of rewards and prizes that players can claim as their own. They will do that by placing their bets and spinning the reels of the game and earning line pays. On top of that, the game comes packed with special icons and unique game play features.
You can get to try out this amazing game right here so you can give it a test drive, before placing any real money bets on the slot at any of the recommended online casinos that we have here.

Gods of Giza takes players to the metropolis of Ancient Egypt, the beautiful and history filled city of Giza, where the Sphinx lies next to the 3 great Pyramids. Players will travel back in time to the era of Ancient Egypt to join the kings and the gods of Giza in order to enjoy one heck of a pokie ride, plus claiming their own share of the ancient golden fortunes and treasures of the Pharaoh Kings. So get ready to be immersed into a wonderful and a vivid gaming experience that is powered by none other than Genesis Gaming, and is offered to players through one of the most popular gaming platform, The Quickfire Platform.

Gods of Giza is a 5 reeled video pokie that is powered by Genesis Gaming. It hosts a total of twenty wager lines. The game has an ancient Egyptian theme that is all about the gods and the Pharaoh Kings of Giza. This explains the title that Genesis gaming has chosen for the game, plus the ancient visuals of the game that feature many aspects from the ancient Egyptian Civilization. These symbols include a golden ankh, a scarab, Horus among other gods from Ancient Egypt, poker card icons and more.

The game has the scatter ankh that can give players scattered payouts when they appear anywhere on the reels. The scatter wins are going to be multiplied by the total wager that was placed. Also, 3 or more scatters would trigger the free spins feature that would give players 8 rotating free spins in which the reels will rotate to form new lines and more winning chances. Lastly, there is the wild scarab that can replace other icons, except the golden scatter Ankh.