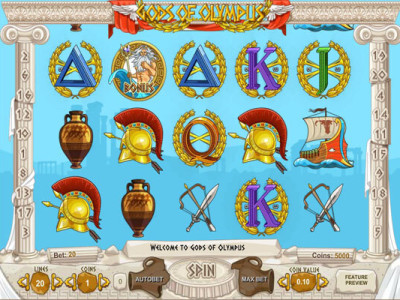 Gods of Olympus is one of the marvelous creations of 1×2 Gaming and as shown by the title of the video pokie, it is all about the Greek Mythology as these gods used to meet at mountain Olympus to decide the fate of mankind. So get ready for a lucrative gaming experience that will take you to Mount Olympus for an unforgettable ride.

The game is packed with a lot of line pays as well as bonus features and symbols, and it is offered in wonderful graphics and sound effects to make sure that players get immersed into the theme of the game fully so they can enjoy the experience to the fullest.

Gods of Olympus is a 1×2 gaming powered slot machine that comes baring many payouts and a one of a kind gaming adventure that is inspired by the Ancient Greek Mythology of the gods and the demi-gods. Players will travel to the Ancient Greek Lands as they join these gods and enjoy one heck of an adventure in search for the golden fortunes and treasures that Ancient Greece was well known for.
The game has 5 reels and multiple win lines through which online players are going to earn massive rewards whenever they give the game a few spins. Players can check out the game right here for free without making any deposits or placing real money bets as we have it here with demo credits.

The theme of the game is pretty clear from the title of the game, and it becomes even clearer whenever players open the game and see its visuals. They will see that it is set in Ancient Greece and it is inspired by the Mythos of Ancient Greece, its gods, its warriors, its fortunes and its demi-gods. It is offered to players in 5 reels and a total of 20 lines.

Across these lines and reels, players will see multiple Ancient Greek inspired visuals and symbols. These symbols include a Greek temple, a Greek Helm, Greek Bow and Sword, Greek pottery, Greek Ships and poker card icons. They can give multiple rewards as they form winning combos, as per the payouts table of the game. It can be opened as players click on the orange Paytable icon under the reels.

The game’s wagering range is pretty wide, which means that the game appeals to all kinds of players. It lies between 0.01 and 50 credits for each spin. Players will determine the stake by going through 3 betting variables (coin value, number of coins and lines).