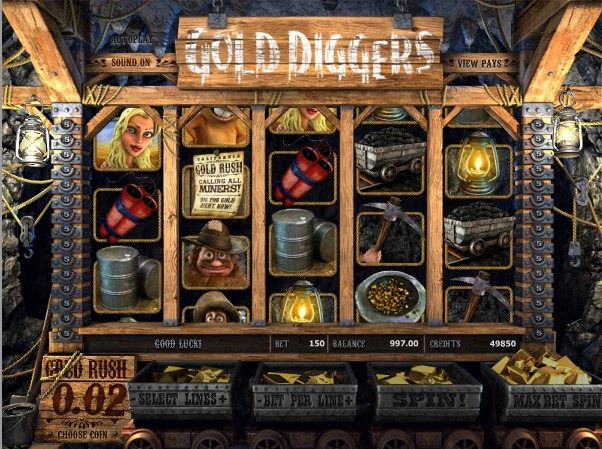 Gold Digger is a 3D slot machine that is developed by Betsoft. It is also clear from the name of the game that it is a Gold Rush themed game. Like any other 3D slot game from the software developer, it has five reels, thirty paylines and a huge number of features and bonus rounds. For example, one of the most lucrative bonuses that Gold Digger offer is called Gold Rush.

The Gold Fever spread across the United States at one time and people were digging up for gold everywhere they can so they can get rich. Since you probably were not alive when that happens, you can still make money out of the gold fever through this 3D video slot by Betsoft Gaming. This game is called Gold Diggers and this game invites players to dig out a lot of rewards and payouts through the line payouts and the different rewarding features that this game offers. The game is presented to players in outstanding graphics and visuals that are unmatched. These visuals help players to get invested into the theme of the game to guarantee them a fun filled and an immersive gambling experience. This is not a surprise, as Betsoft Gaming is known for developing games of high quality visuals and sound effects. The game also comes with a lot of bonus symbols and special features that will maximize the payouts for lucky players.

Gold digging was very popular in the USA, almost everyone alive at that time was digging for gold, this is your chance to dig for gold as well through this 3D video slot. This is how players will still make money out of the gold fever. The entire game is themed around the gold fever and gold digging. This is why players will see that present in the symbols on the reels, the soundtrack and the design of the game itself. For example, players will see that the wagering control panels have that theme as the buttons come in the form of mining carts. They will see that the reels of the game are located in a gold mine with rock formations in the background and wooden planks surrounding the reels.
As for the game’s symbols, they include everything that players can find in any gold mine, this includes dynamites, gold, mining carts, a pickaxe, two gold miners, a blonde female, barrels, Gold Rush poster, a lamp and more.

The game’s bets can be controlled through the wagering area and panel at the bottom of the 3D slot’s reels. Players will find different options that include the bet per line, the value of the coins and the number of lines that they want to wager on. The game has 30 lines and coin values between 0.02 and 0.50. This means that players can place bets that vary between 0.02 and 150 credits for a spin.

The dynamite symbols is a special symbol as players who get 3 of these symbols in a winning combination on an activated line, they will explode and symbols will replace them which gives players another chance of achieving a win. Players can view the details of these bonus features among others as well as the line payouts at the paytable of the game.