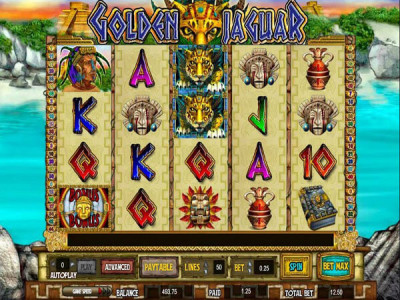 In the animal kingdom, the fittest and the powerful survive. From the mighty prideful lion to the fast and swift cheetah, these ferocious cat-like animals know how to make their presence known in the kingdom. They aren’t going to just sleep all day and dream of pride and glory; they’ll fight their way to become the greatest in the kingdom. But there’s nothing more vigilant and more prideful than the Golden Jaguar. He’s a symbol of Aztec history and he’s making his presence known in the world of slot games in his own self-titled slot game.

The Golden Jaguar slot game is a 5 reel slot game and is designed with an Aztec theme. You’ll be surprised to see that this slot games has a whopping 50 paylines! This is perfect for those people who want to save it all. Sure, more paylines means more smaller wins but the people who risk it all will have a cool option to go for: betting up 3000 coins. More risk means more rewards? Oh yes. You’ll also get a slew of bonus features in this game so hang on tight as you join the journey of the legendary Golden Jaguar.

The Golden Jaguar’s slot game design is based on an Aztec theme and as such will showcase this theme everywhere. You can see it from the background, from the various symbols such as the Mayan statue, the Aztec symbols, the Jack, the Queen, the woman and from the sound effects that emit that Aztec feel. You may not be Aztec yourself but having a game that feels and sounds close to the Aztec culture will surely make you giddy all inside. Couple that with some coco drinks and you can make your experience authentic than ever (not many know this but Aztecs used cocoa as something they would let their sacrificial people drink before they’re you know… used for sacrifice).

Any gambler lazy to click spin after spin after spin can set up random spins using the auto-play feature. The game can be spun on auto randomly up to 999 times. Whether you’re in need of some cocoa or you want to catch the Golden Jaguar yourself, the auto-play will play the game nicely for you. You can tweak the speed so if you want some good times with the jaguar, you can set it nicely and slowly at your pace.

The wild symbol in this game is a 4 icon wild symbol called the Golden Jaguar. What makes wild symbol better than other wild symbols is it can fill up an entire reel row all on its own. It can partly fill up one reel as well so you can expect to get more winning combos using these cool wild symbols.
The bonus round is trigged when you get a number of bonus symbols on certain reels. Here, you’ll get free spins and multipliers to make more winnings. Nothing really special here but if you want to raise those winnings up to the point of raking more winnings than you want, this is the way to. It’s winnings galore for you in this bonus round.

If the Jaguar still baffles you, rules and help pages are here. Made by the Cryptologic developers, these pages will tell you everything: from the values of symbols, the patterns of paylines to the rules of the game, you’ll know everything to win the game. This is especially helpful for those who are new to the game or who are in need of a refreshment of the slot game mechanics. Jaguar’s not going to cut you up if you read so don’t be afraid to take a look. You don’t want to regret it if you weren’t able to get the info to win your jackpot so take a good look and you’ll win that good combo.

Overall, Golden Jaguar is a good slot game. With its nicely integrated Aztec design on the slot game, its slick bonus features and solid gameplay for a slot game, you’ll definitely have a good time with Golden Jaguar. New or old, you’ll have a blast playing with the Jaguar in the world of the Aztec.