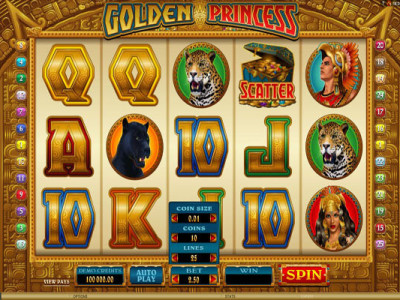 The Golden Princess is one of the pokie machines that were released by Microgaming in 2015. This relatively new game has an amazing theme that is packed with many fortunes and treasures. Plus the wonderful theme of the game, the pokie does come in vivid graphics that allow players to enjoy a truly one of a kind gaming experience that they will never get enough of.
The game is offered right here or free, so players can join the Mayan Golden Princess right here for fun without any deposits, before they can try out the game for real cash at any of the casinos that host the game.

Get ready to embark on a one of a kind pokie gaming experience that will take you back in time to the Ancient Mayan Civilization for an experience that is like none other. Such experience is offered here for free, and it is offered in wonderful visuals and sounds, plus an amazing set of line pays that players will form during the game play, and many other special icons and features that will make the players’ stay at the game quite lucrative.
The Game’s Theme and Setup

The title of the game, Golden Princess, refers to a Mayan Princess, and since the Ancient Mayan Civilization was well known for its golden treasures and fortunes, the game will invite players to claim their share of these golden fortunes and treasures, by accompanying the Golden Princess through the reels and the lines of this pokie. So get ready to travel back in
time to the Mayan era for many fortunes.

The game has a setup of five spinning reels that host a total of 25 bet lines that online players will be able to place their wanted bets on. Players will do that, and control the game play of the game under the reels through the buttons at the control panel. They would also be able to open the payouts table of the game by clicking on the View Pays button.

Placing the bets is carried out as players click on the Bet cell at the control panel which will then expand in order to show players the betting options that they can toggle through so they can determine their wager. They can place coins with values from 0.01 up to 0.10, and they can place from 1 up to 10 coins per line, and of course, they can activate from one, up to all 25 lines. This creates the betting range of the game that varies between 0.01 and 25 credits or each spin.

The game has a free spins round that becomes active when players get 3x scatter treasure chest symbols anywhere on the reels. This would trigger from 10 to 20 free spins, depending on how many scatters. There is also the wild icon of the game which is represented by the Golden Princess logo, which can also trigger a random win multiplier of x2 or x3.