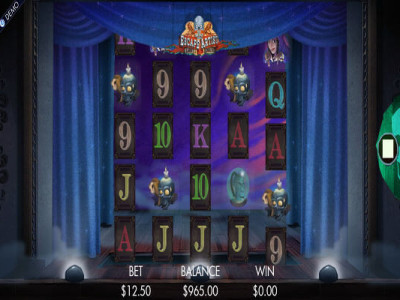 Great Escape Artist is one of the latest games by Genesis Gaming that invites players enjoy a marvelous gaming experience that takes them on stage with an Escape Artist, which is an obvious tribute to one of the greatest magicians and escape artists of all time, Houdini.

The game will have players holding in their breath as they watch the dangerous stunt while they get to claim plenty of great prizes in return. The game is fun, action packed and very rewarding, and is guaranteed to keep players at the edge of their seat during the entire game play.

Great Escape Artist is a Genesis powered slot machine that has 5 reels and has a format that hosts a total of fifty wager lines for players to place their wanted bets on. Players can place their bets under the reels before spinning the reels and enjoying the game. The slot takes them on a fun ride as they join the escape artist as he tries to make it out of a dangerous contraption in an amazing breath taking stunt on stage. The game is not only fun and exciting, as it is lucrative, whether through its fifty wager lines, as well as its special icons and bonus features that players are invited to take advantage of. Players can check the pokie for free here as they spin its reels with demo credits before placing real bets on it at online casinos.

The Great Escape Artists is an exciting game that comes in a setup of 50 lines that appear scattered on its five reels. The game is themed around the crazy water grave stunt that only the best escape artists like Houdini can pull. The escape artist that we are joining in this game is not only backed by his skill, as it seems he has sold his soul to the devil, as the game starts out with a scroll that shows a contract with Lucifer signed in blood. This is why the devil will appear as a symbol across the reels of the game.

Other symbols include the escape artist in his water grave contraption that can stack to cover the entire reel to show the entire contraption. Other icons include poker card icons, a gypsy witch, a genie, skulls and an ancient book.

The escape artist in his contraption is the wild icon of the game that is going to replace all other icons across the game’s reels and its lines to help players form a winning combo. This wild can appear stacked on the reels to cover the entire reel, but it will not replace the scatter symbol.

The scatter icon of the game is the scatter skull with the logo of the game. This scatter icon can give out scattered rewards and it can also trigger the special feature of the slot when 3 appear anywhere on reels 1 and 5. Players will earn 10 free spins with the expanding wild feature.