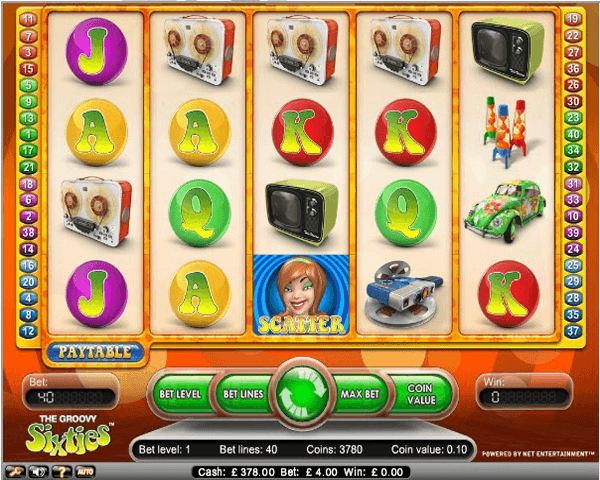 Groovy Sixties is a video slot that brings players to the sweet sixties. The game takes players back by presenting them with a set of impressive symbols that are all inspired by the 1960s. This game is developed by Net Entertainment. The game has a set of fantastic features that allow players to enjoy a lucrative gambling experience. These features include a scatter symbol and a wild symbol. This game has five reels and forty paylines.

Groovy Sixties invites players to go on a nostalgic ride back into the sixties, which is obvious from the name of the game. This video slot achieves that by offering players symbols that are inspired by that time era, this is why players will notice all of the things that they enjoyed during the 60s when they were young. Players who were not here during the 60s will not feel nostalgic but they certainly saw some of these things on TV in movies or TV shows, so they will still be able to enjoy it.

The game is presented in amazing visual graphics that are accompanied by sound effects that are inspired by the 60s. This is why players will enjoy 60s music in the background as they enjoy the video slot. The game is available here in free mode so players can enjoy it for fun or they can head to Mr. Green casino in order to try the game with real money.

The game has a pretty simple setup as it boasts 5 spinning reels and it has a total of 40 lines that online players will place their bets on. As was mentioned in the introduction, the game is themed around the 60s and everything that we used to see during the 60s. The theme dominates the reels of the game as the symbols that appear are all inspired by that time era. These symbols include a boom box, long boots, an old TV, a beetle car and poker card symbols that are crafted to fit the 60s theme of the game. The background music, the design and the layout are also themed around the 60s. All of this helps players get immersed into the theme of the game and into the groovy sixties.

The control panel of the video slot can be found under the reels. This panel will enable players to control every aspect of the game, view the paytable, control the sounds, spin the game and place the wagers by going through the different wagering options.

The wagering options are located underneath the reels. The players will choose a coin value that they want to use in order to place wagers, a number of lines that they wish to activate by placing wagers on and the bet per line. The coin size value varies between 0.01 & 0.50, there are 5 betting levels and 40 lines. All of this creates the slot’s wagering range which varies between 0.01 and 100.