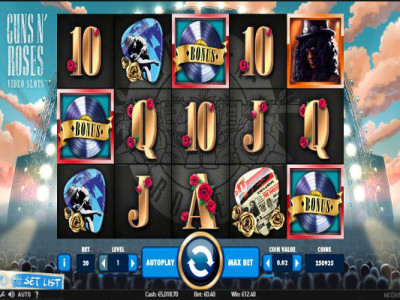 Guns N Roses is one of the newly released slot machines by Net Entertainment. The game is themed around one of the iconic and immortal rock bands of all times, Guns N Roses. This is why players will see that the 5 reels of the game and its 20 lines are designed in an iconic Guns N Roses fashion. Starting from the members of the Rock Band who will appear on the reels, to the Rock Music playing the background that players can control, all of this creates a truly one of a kind rock themed gaming experience. This is why players, especially the rock fans, will never get enough from this game, and they will keep coming back for more. The best part is that players can enjoy this game for free right here with endless demo credits, so turn your volume up and get ready to enjoy what Rock is all about

Guns N Roses is one of the most popular Rock bands in the world and if you are a fan, then this is the slot machine for you. The game has 20 bet lines and 2 rows of symbols that are scattered across the 5 reeled setup of the game. Of course, given the name and the theme of the game, it is not a surprise that the symbols and the entire visuals of the game are inspired by Rock concerts and Rock bands. Even the sounds that play in the background are rock tunes, songs and the noise of the crowds at rock concerts.

Guns N Roses has everything players would expect from a rock themed pokie game. This includes the novelty option that allows players to choose their own soundtrack that plays in the background. The song list includes Sweet Child of Mine, Welcome to the Jungle, Paradise City and November Rain and others. Players will open the song list at the bottom left to choose the soundtrack they want to listen to. The reel set of the game is set on the stage of a huge concert with thousands of fans screaming and dancing. The symbols that would appear spinning across the reels and lines include the different members of the band, golden records, microphones, guitars, drums, Guns, Roses, the G N R logo as well as poker card icons.

The Guns N Roses symbol is the wild icon of the game, it can appear at random anywhere across the reels, except on the 3rd reel during the Appetite for Destruction feature. There are also 3 randomly triggered features that can take place during the game play. These features are the Appetite for Destruction Wild feature, the Solo Multiplier feature and the Legends Spins feature. There is also a bonus round that is triggered when players get 3x bonus icons on reels 1, 3 and 5. Players will get to spin the wheel of bonuses to trigger one of three bonuses that include the Crowd Pleaser, This bonus is a multi tiered bonus feature in which players will select some of the music instruments to earn prizes and points so they can advance to the next level and earn more prizes.