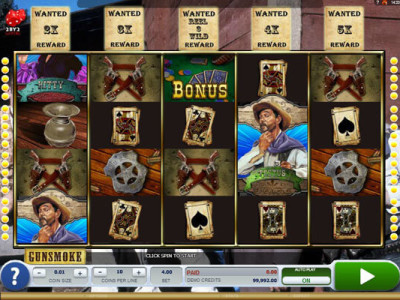 Gunsmoke is the latest 2by2 powered pokie to be released to the online gaming market, and it is already becoming one of the top games for 2016. This is because this brand new 2by2 slot has an amazing theme that is action packed and full of rewards as it takes players to the Wild West where they will join a Marshal and other characters as they enjoy an adventure in the western world. So if you have always enjoyed old Western movies that had a lot of cow boys, gun fights and damsels in distress, then you will certainly enjoy this game right here, Gunsmoke.

Gunsmoke is a 2by2 powered pokie machine that comes with one of the most popular and sought after themes in the industry of online gaming, the Wild West. We have seen many western movies that always followed a main character who was a vigilante or the US marshal who are hunting criminals and wanted persons so they can face justice. Players in this game will join a Marshal in a Wild Western inspired environment that is presented in top notch visuals and accompanied by amazing audio effects that would take players deep into the theme of the game so they can enjoy the ultimate western experience. In addition to the great visual quality and the sounds, the game is also pretty rewarding to its players who will earn great prizes through the line pays and through the bonus features and special icons that the pokie hosts.

The theme of the game is clear from its title, Gunsmoke. This is because the game takes players into a Western town, just like the ones that we see in the movies, as they join a Marshal as he tries to clean the town from the wanted criminals. Of course, since the game has a wild west theme, players will enjoy Western inspired visuals that include guns, badges, deck of cards and more. They will also see the characters of the game appearing as symbols across the reels as they include Marshal, Hitty and Pestus. The same can be said about the sound effects and the music that plays in the background, as it is also inspired by the Western culture.
The game has a format of 5 reels that host 20 lines. Under the reels, there is the control panel through which players will control the game play.

The bets are created as players toggle through the betting options of the game which will result in a betting range that is between 0.40 and 160 credits per spin.

The game has a wild icon, which is the wanted poster o a criminal that is pinned to the wall. It will replace other icons, except the other special icon of the game. The bonus scatter icon is the poker cards, 3 of them will trigger the bonus round of the game. Players will either choose the free spins round or the shootout bonus. There are also wanted poster multipliers and bonuses above the reels that are triggered by the Wild Poster.