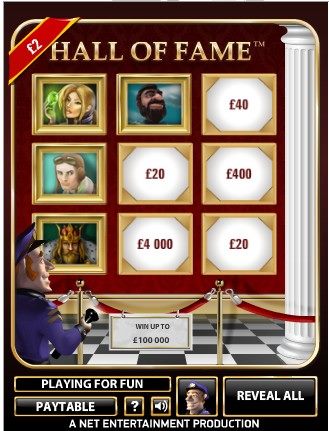 A very nice way to play scratch cards. At hall of Fame, players will control the flashlight of a security guard as they select the picture frames of celebrities to reveal the money amounts underneath. A very innovative and a creative concept to scratch cards. Players can win up to 100,000 with each ticket. Tickets are equal $2.

Hall of Fame is a very unique scratch card game that presents players with a very exciting experience that is more than a normal scratch card game. Although the game is a scratch game at heart, but it is still fun and exciting as it offers players a new way of scratching the cards, in fact, there are no scratching at all. The game will take players into a museum where they will find a security guard and his flash light. The players will also see a number of portraits on the wall in the hall of fame. The players will then control the flashlight of the guard in order to shed light on these portraits. Each ticket costs players 2 casino credits and they can win up to one-hundred thousand credits.

The game is presented to players in wonderful and stunning 3D graphics, which is not a surprise since the game is powered by Net Entertainment, one of the leading names in the industry.

The game is located in a museum as mentioned above, in the hall of fame to be exact. The players will see nine different portraits and they will see a security guard with his flashlight. Under the portraits, the players will see the control panel of the game it is where players will buy a card, control the sound, reveal all, check the paytable alongside other game settings. The nine portraits include a joker, a Texas businessmen, an Asian lady, a pilot, a stone age man, a politician and more.

The paytable of the game will show players the odds of winning depending on the number of cards that they play with. Despite being helpful, it is only as a reference because the outcome of the game is 100% random which is the purpose of the game. It is a game of pure luck that players enjoy in order to test their luck.