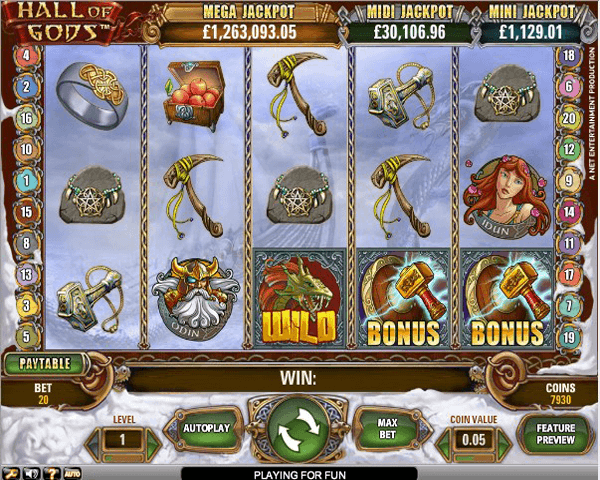 Hall of Gods is a Net Entertainment video slot machine that has five reels and twenty paylines. This game will be very familiar to people who come from the Nordic regions since the game is themed around the Norse mythology and gods of the north, hence the naming of the game, Hall of Gods. This is also why the game has symbols that are inspired by that culture such as Odin, Loki, Freya and other gods from the mythical culture of Northern Europe.

Hall of Gods is a mythical themed video slot machine that is based around the gods of the North. The gods of the Vikings and others who lived in the Nordic areas years ago. This is why players will see that the symbols on the game’s reels, the design and the background are Norse themed with Vikings ships and gods. The game is brought to the online gambling industry courtesy of one of the biggest names in the world of online gambling, Net Entertainment. This is why players can expect to find the highest quality possible, this includes the visuals of the game, the sound effects and the features. The game can be played for fun right here so players can get a taste before heading to Mr. Green casino or other Net Ent powered casinos in order to place real money wagers on the game.

If you are a fan of the mythical gods of the north and the Vikings, then this game will suit you well. This is because the game will take you through that world as it is themed around the Norse gods. The game presents you with such great experience through a simple setup of 5 reels & 20 lines. The symbols appearing are all inspired by the mythical culture of Northern Europe. This includes the Norse gods such as Loki, Thor, Odin, Freya, Idun and other Norse themed symbols such as Thor’s hammer, a scythe, a pickaxe, a ring, a necklace and other symbols. The design of the game and layout is also themed around the gods with symbols and signs everywhere. All of this helps players into getting invested into the theme of the game so they can enjoy this game to the maximum.

The game’s wagers depend on two things only, and not 3 as other Net Ent games. This is because the numbers of lines that layers will wager on is fixed at 20. Players will only choose the betting level and the coin value. The coin values available are 0.01, 0.02, 0.05, 0.10, 0.20 and 0.50. As for the betting levels, there are 5 betting levels available. This results in the creation of the game’s wagering range which lies between 0.01 and 50 for each spin .