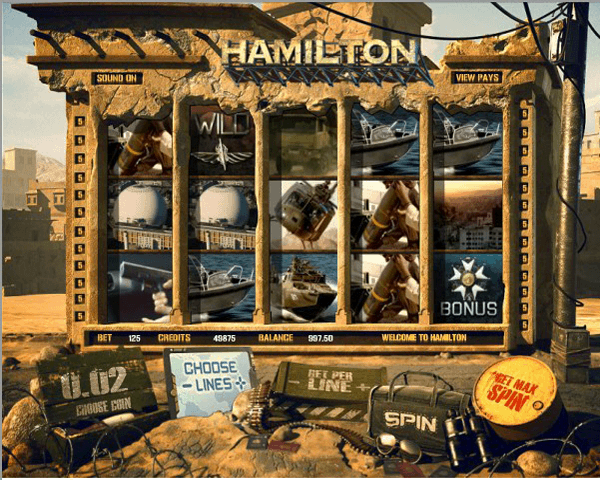 Hamilton is a very exciting slot machine that is themed around secret agent missions. The agent is Carl Hamilton who descends from Sweden.  So players who always wanted to battle terrorists and go on secret missions, this game is perfect for them. This game has five spinning reels and 30 paylines. The wagering range of this game varies between 0.02 and 62.50. The game also has a jackpot that pays out a total of 7,500 coins.

Players will enjoy the thrill and the excitement of being with a secret agent as they will surely like the design and the symbols that the game has. These symbols are spread across the games lines and reels. Speaking of lines and reels, the game has a setup of 5 non progressive reel and 30 lines. As for the symbols, they include a police badge, a yacht, a helicopter, a gun, buildings, a rocket, different army symbols, an army truck and an army boat. Besides the reels, the entire design of the video slot has the same theme. The reels themselves are located in a war-damaged area with fallen buildings and destroyed streets, the buttons that online players will click in order to spin the game, place bets or choose lines come in the shape of army equipment.

There are different coin sizes available that players can choose from in order to place their wager. These sizes include 0.02, 0.05, 0.1, 0.02 and 0.5. Players will also choose a number of lines between 1 and 30 and a bet per line. All of this helps players determine their wager that can be as low as 0.02 and as big as 150 for each spin on Hamilton.