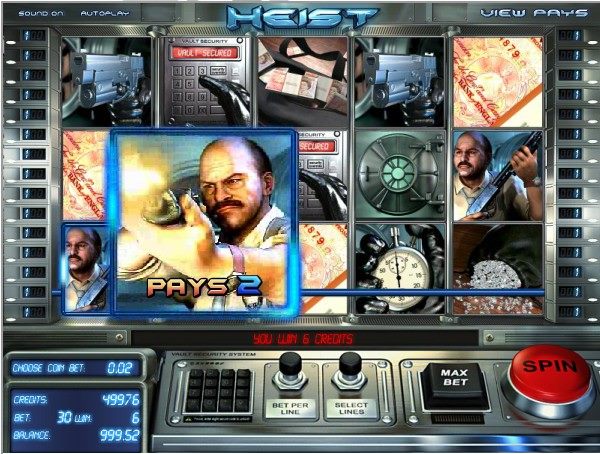 Heist is a 3D video slot machine by Betsoft Gaming. The game is themed around a Heist that takes place in a bank. It gives players the chance to be a part of a movie with the amazing animation and the live audio effects. Apart from winning combos, some certain combos can give players very high payouts. One of its rewarding features is called “Glass Cutter Feature”.

Heist is a wonderful 3D video slot machine by Betsoft. This game would allow players to accompany a professional bank robber who is attempting his last bank job. He is being pursued by a detective who has been trying to catch him for years but he has been succeeding in getting away each time. This time, the police detective is closer than ever. Would he pull of this last hit or will he get caught. Heist is a very entertaining video slot machine that would offer players an outstanding experience that can’t be found at any other game. It is presented to players win outstanding graphics, vivid visuals and real sound effects, all of this helps players to get engaged into the theme of the game.

The game is filled with 3D symbols that are spread across the 5 reels of the game and the 30 wagering lines that are offered to players. This gives players 30 different chances of achieving a winning combination of symbols in order to be eligible to earn a line payout. The game is themed around a bank robbery that is being carried out by a professional robber who is being closely pursued by a police officer. This is why the symbols appearing on the reels are all inspired by bank and bank robberies. This is why players will notice that the symbols on the reels resemble the tools that they can see at most heist themed movies. These symbols include a bank vault, high tech tools, the bank robber, the officer holding a shotgun, the vault blueprints, a watch, a gun, diamonds and more.

The players will control their wagers at the bottom through the control board of the game. This board contains the different options that the players can go through in order to determine their wagers. These options are the bet per every single payline, the number of lines that they wish to activate and the coin value that they want to use in order to place these wagers. The minimum bet that can be placed at this game is equal 0.02 and the maximum wager that can be placed if they place the maximum number of coins of the biggest value on all of the lines is equal 150.

The combination of symbols needed to earn a line payout and the bonus features can all be viewed at the paytable of the game. This paytable of the game can be opened by players after clicking on the Paytable button that can be found at the top right corner. One of these bonus features is the scattered bonus. Players who get a minimum of three drill symbols on the reels will be able to earn scattered payouts according to the number of scatter symbols that appeared on the reels. As for the Codex bonus round, it can be triggered with three vault doors on the reels.