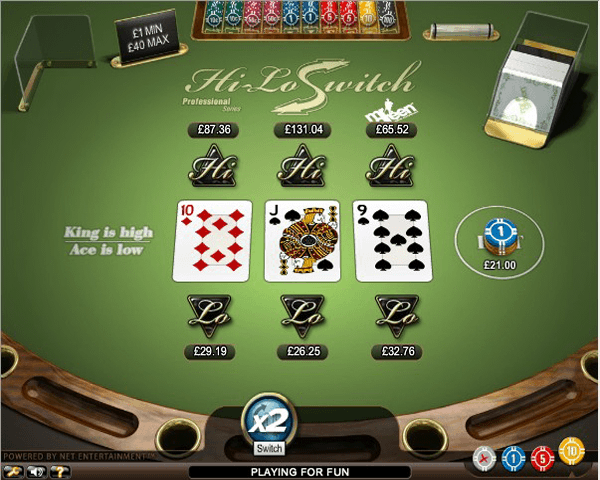 Hi Lo Switch is a very popular table game that can be found at Net Ent powered casinos such as Mr. Green Casino. The player gets dealt three cards after he places his wager. Players will then have to guess if the next card is higher or lower than the existing card. If they guess it right, they will get paid and keep trying until they decide to collect but one wrong guess will make it all go away.

Hi Lo Switch is a very rewarding and an exciting game from the rich portfolio of Net Entertainment. It is a game of Hi Lo where players will test their luck and their prediction power in order to win great rewards. The game is presented to players in wonderful visuals and amazing shuffling and dealing sounds that would make them invested into the game. The table is green colored and it has a deck of cards at the top right, chips at the top and game rules at the left. All of this sets the mood and the environment for the players to make them feel as if they are enjoying this game at a Las Vegas casino.

The game is a game of Hi Lo, which means that players will predict whether the upcoming card is of a higher value or a lower value than the card that is already there. To make things easier for the players, there is not only one card but three cards on the table in order to give players different chances because some cards might be hard to predict such as middle value cards like 10’s, Js and 9s. So if players see a middle value card, they can leave it and go the other two cards. The players will also be able to switch the cards two times if they do not like them, this is why the game is called Hi Lo Switch. In this game, the highest card is the King and the lowest card is the Ace.

The game will start as players place their wagers. They will select one of the four available chip sizes at the bottom right area of the screen. The chip sizes are 1, 5 and 10. There is also a blank chip that can be used in order to remove any present wagers. The minimum bet is 1 while the maximum bet is equal 40.

After players place their wagers, they will click on deal. The dealer will deal three cards facing up on the table. Each card will have two arrows, one at the top and one at the bottom. Each button will also have a credit value which is the payout that players will earn. If players think that the next card will be higher, they click on the arrow at the top and if they think that the next card is lower, they will click on the arrow at the bottom. The value of the payout depends on the value of the card itself.