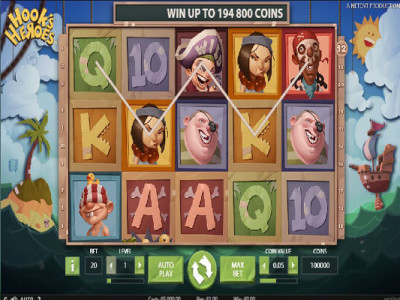 Ahoy There, check out the newest game by Net Entertainment to hit the market, it is this game, Hooks Heroes. It is a 5 reeled, 20 lined video slot game that has 3 rows of symbols. The game guarantees players an adventurous gaming ride that takes them into one of the most popular children story, Captain Hook and Peter Pan. They will join Captain Hook on a pirate themed adventure across the oceans in order to claim as many fortunes and rewards as they can.

The slot comes with 3 different features that players will be able to choose from, as well as a wild icon and a scatter symbol. So get ready to enjoy a one of a kind gaming adventure that has Caribbean styled sounds, with pirate themed cartoon visuals that create an immersive ride that is full of surprises.

No introduction is needed for such a game, it is enough to say that the game is powered by Net Ent, and that it has a pirate theme. Those two things together will vouch for the quality of the game, and what it has to offer to players.

It offers an exciting gaming adventure that takes players on a journey in the open seas with a chance to claim plenty of rewards, whether through the regular pays that the 20 bet lines can offer along with the symbol, and the special features of the game.

Have you read the popular children book of Captain Hook? Did you get more enticed about the pirate captain, rather than paying attention to Peter pan? If the answer is yes, then this slot machine is made for you. It invites players to join Captain Hook on a pirate inspired gaming adventure where they will roam the seas with other children and pirates in search for treasures and fortunes. Get ready to go on that ride through the 5 reels of the game and the twenty bet lines that it offers.

The wagering range is created as a result of the 2 wagering variables that the game has. These two variables are the number of coins on each line, which is also referred to as the “Level” and the coin value. The coin values vary between 0.01 credits and 1 credit, while players will have 5 betting levels. This creates a betting range that starts at 0.20 and ends at 200 credits for each spin.
Bonus Features

The bonus features, alongside the line pays that the game has can be viewed at the paytable of the game. Players can view this paytable by clicking on the “i” button under the reels. They will see that the slot offers them a wild icon, which comes in the form of Captain hook. It will stand in for other symbols, except the scatter ones.

Speaking of the scatter symbol, it is the kid in the alligator costume. Three of these symbols will trigger the free spins feature in which players will pick one of 3 bonus features. They are the Fairy Feature, the Mermaid Feature and the Pirate Feature.