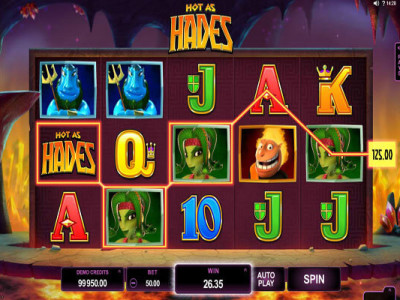 Take a trip to the underworld of the Greek Mythology and rub shoulders with none other than the god of the underworld, Hades himself. The game approaches the Greek mythology theme in a friendly way that is fun and full of rewards. So instead of torture and eternal damnation, Hades has many winning chances and offers players an action packed gaming experience, in a good hellish way. So get ready for an immersive gaming ride that is full of rewards right here for free.

Hot as Hades, a trip to hell, without all of the torture, but with a lot of surprises, prizes and bonuses instead. So get ready for a high paying and an immersive gaming experience that has an amazing theme and sounds. The game is one of the newest games to be released by the gaming developer and it can be played right here for free with an endless number of spins, before placing real money bets at any of the recommended casinos that we have here.

Hot as Hades is a 20 lined video pokie machine that takes players on an action packed ride that is full of rewards. This ride takes them deep into Hades, which stands for the underworld in the Ancient Greek Mythology. It is ruled by none other than Hades, the god of the underworld. Players will be glad that they took that trip down to Greek hell because it has many rewards, surprises and bonuses waiting for them. On top of all of that, the game is presented in astonishing visuals that approaches the theme in a cartoonish way, which lightens up the dark theme of Hades and the underworld.

The betting range of the game is determined by the wagering options that the game hosts. First of all, the twenty paylines of the game are always active, which means that players will only determine how many coins they want to place and the value of these coins. They can determine those two things at the Bet Call which is located under the reels of the game. Players will choose a number of coins, between 1 and 25, with values that vary between 0.01 and 10. This creates a wagering range that sits between 0.20 and 50 credits for each single spin.

The game has many special features such as the fiery wild symbol that would substitute other icons. There is also the randomly triggered Super Mode which sets the reels on fire and triggered 5 free spins. Lastly, there is the high paying and action packed Quest Bonus which is triggered whenever players manage to get 3x scatter crystal skull symbols on the reels. They will go on a second screen bonus round where they will try to retrieve the crystal helm.