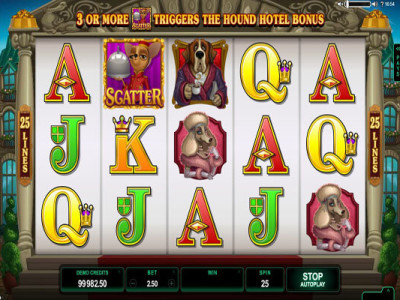 Hound Hotel is one of the recent pokies that were released by none other than Microgaming. The game has a unique theme that takes players on a journey into the Dog world where they will pay a visit to the Hound Hotel. This journey is so surreal that it will keep players at the edge of their seats at all times during the game play. Apart from the amazing visuals, the sounds, the game play features, the game comes packed with a generous set of line payouts and bonus features that they can take full advantage of during the game play. The best thing about this game is that you can try it out here without any deposits before placing real money bets at any of our featured casinos on the right side that offer the game.

An introduction to Microgaming games always begins with how fabulous the visuals are, which is certainly the case with this game, Hound Hotel. The game has wonderful graphics and sounds that create a highly immersive gaming experience that players will truly enjoy from the moment they open the game and place bets, to the second they are racking up the great rewards that the game has for them.

The title of the game is hound Hotel, and this is exactly where players will go during the game play as the game takes players into an alternate reality where dogs inhabit the world and players will pay a visit to one of the biggest hotels in that world, the Hound Hotel. This is why all of the visuals of the game are inspired by dogs. So get ready for a dog themed experience that will leave you speechless. These symbols will appear on the 5 reels of the game and will be scattered across the 25 bet lines that the game has for players to place their desired wagers on.

Speaking of wagers, players will be able to do that at the Bet Cell that is located under the reels. Players will click on it to reveal the 2 betting options that the game has. These options are the number of coins players want to place, as they can place up to 15 coins .There is also the value of these coins that varies 0.01 between 0.10. The game’s 20 liens are fixed, which means that these coins will be placed on each line.

The game has a wild icon which is the logo of the Hound Hotel which can replace all other icons. Three wild logos can also trigger the Dashing Wilds bonus which is activated randomly during the game play. The Room Service dog is the scatter symbol of the game, 3 of these scatters anywhere on the reels would trigger 1 out of 5 free spins round. Players will pick 1 of many doors, on 3 levels to determine which free spins round they will claim.