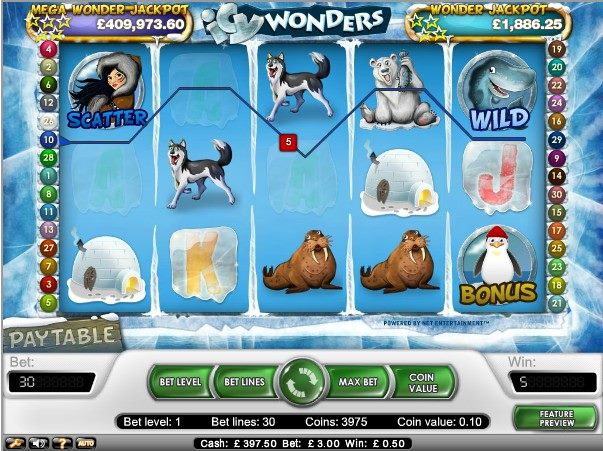 Icy Wonder is an arctic themed video slot. It is a progressive slot with not one, but two separate progressive jackpots. The first one is called the Wonder Jackpot and the second one is called The Mega Wonder Jackpot. It also has bonus rounds and other unique features that allow players to enjoy an exciting and a rewarding gambling experience.

Let’s get chilling, this is what this game provides to its players. A game that they can play to “cool” off after a hard round of gambling on the internet. The game is themed around the arctic with freezing symbols everywhere. Even the reels themselves are freezing with ice everywhere. The soundtrack that this game provides and the noises in the background are also themed around the arctic with sounds of penguins and other arctic creatures.

The game is provided to online casinos by none other than the well accredited and well known software developer Net Entertainment. Net Entertainment only powers the greatest online casinos in the industry such as Mr. Green among others. This fact also vouches for the great graphics and visuals that the game offers as players are guaranteed a visually satisfying experience at the video slot, an experience that is unmatched anywhere else. This is why Net Ent games are favored by millions of online players.

Ice, Ice and more ice, this is what this game is all about. All of the symbols are either surrounded by ice or inspired by the cold arctic. The symbols include card symbols (K, Q, A, J and 10s) and these card symbols are incased in an ice block. Other symbols include arctic creatures, a penguin, a polar bear, an igloo, a female arctic resident and a white wolf. All of these symbols appear on the 5 reels of the game and the 30 lines that the game has to offer to its online gamblers.

Even the reels are located in the arctic with snow and ice all around them. All of this enables players to be invested into the game’s these so they can feel its cool and chill. Players will be able to control every aspect of the game including specifying their bets and placing max bet as well as spinning the reels through the control panel of the game that can be found right underneath the video slot’s reels.

The game has two progressive jackpots that can be triggered by lucky players. There is the Wonder Jackpot and the Mega Wonder Jackpot. Besides the jackpots, the game has a set of rewarding features such as a scatter symbol, the female arctic resident while the shark is the wild symbol and the penguin is the bonus symbol.