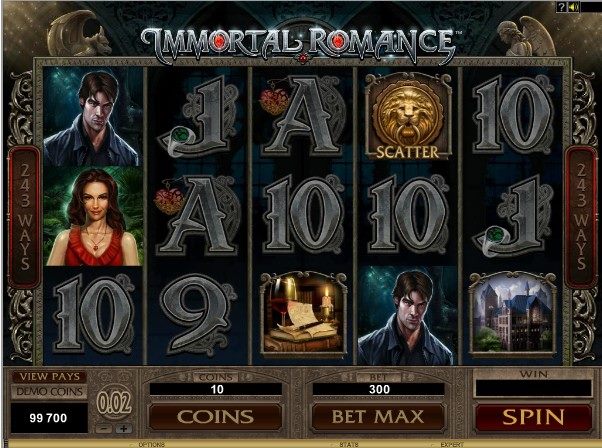 Immoral Romance is a vampire themed slot machine by Microgaming. This is why players can expect a lot of vampire inspired symbols. It is a 243 ways to win slot machine that allows players to take advantage of many rewarding and exciting features. Its wagering range varies between 0.01 USD and 300 coins.

Immortal Romance is a 243 ways to win video slot machine from the rich and magnificent Microgaming portfolio of games. The game is themed around one of the most popular themes these days, vampires. This theme is quickly catching on fire in every single field including movies, TV series and games among others. Microgaming was quick and decided to catch up with the popularity of this theme and presented the online gambling world with this amazing vampire romance themed video slot machine, Immortal Romance. The game presents players wonderful graphics and outstanding audio effects. All of this enables players to sink deep into the theme of the game and to enjoy the Vampire theme to the max.

After the great success of movies such as Twilight and TV shows like True Blood and the Vampire diaries, Microgaming was one of the first software developers to capitalize on the success of the romantic vampire theme with the release of this game. This game will take players into the love and danger filled world of vampires with all of its mystique. The game is more than a video slot game, it comes with a compelling love story that players can view so they can get more engaged in the story. They can view each and every one of the four main characters’ stories by clicking on view pays. When they click on View Story, they will see the story of each character. The symbols appearing on the video slot game’s reels include the main characters of the video slot, they are named Sarah, Michael, Troy and Amber. It will also include poker symbols that are crafted in a way to be fitting with the theme of the game. Other symbols include a spell book, a magic ancient scroll, a mansion, an ancient doorknob and the Immortal Romance game logo.

The game has the 243 ways to win setup which is much better and more rewarding than the usual paylines. This is because players will not have to pick paylines but instead they have 243 ways to be paid, which is a great plus.

The game has a wide wagering range that enables the game to appeal to both high rollers and low rollers. This wagering range varies between 0.01 and 300 coins per spin.

Like any Microgaming game, the video slot comes with a great collection of special symbols and rewarding features. There is the wild symbol that can replace any other symbol which helps players in achieving greater rewards. The wild symbol of the game is the logo of Immortal Romance. This symbol will not only replace other symbols, but it will also double the winnings that players earn with a wild symbol in the combination.

Another bonus symbol is the lion shaped doorknob, it is the scatter symbol. A minimum of three scatters will trigger one of the four free spins rounds that are named according to the main characters.