It came from venus 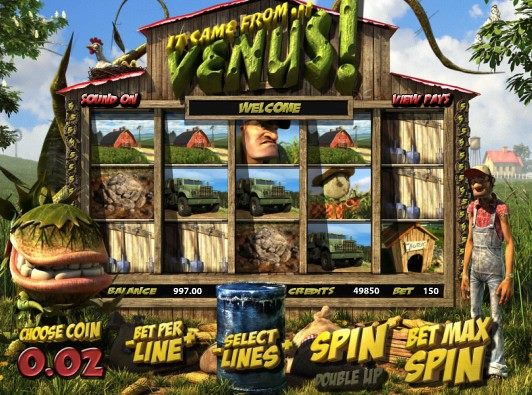 It came from Venus is a 3D video slot game that is developed and designed by Betsoft Gaming. It has five reels and thirty paylines. It is themed around a flesh eating Flytrap that came from Venus, hence the naming of the game. This alien came to earth on a falling asteroid. Players will enjoy this game as it is filled with lucrative features and amazing animated graphics.

It Came from Venus is an alien themed video slot machine that is developed by one of the leading names in the gambling industry, Betsoft Gaming. Being powered by Betsoft meaning two things. The first thing is that you will be able to enjoy this game at Mr. Green Casino among other Betsoft Gaming powered casinos and the second thing is that the game is going to provide you with a very visually pleasing and a rewarding experience that you can’t find anywhere else.

This video slot machine is a 3D video slot that has five spinning reels and thirty wager lines for the players to place their bets on. The theme of the game is a story of a farmer who encounters a life form from outer space. This farmer lives in his farmhouse living off the good of his land and one day, he hears a great noise coming from his warehouse so he goes to see what is happening. He finds out that there is an alien that crash-landed in his land. This alien is a giant Venus Flytrap from outer space. Instead of fighting it or trying to kill it, he starts to befriend it. This is why the players will notice that the Venus flytrap and the farmer are always kidding and joking with each other around the reels of the game.

The symbols that will appear on the game’s reels are all inspired by the theme of the game. Players will notice numerous farming related symbols such as the farmer, the warehouse, a Do Not Trespass sign, a farm truck, the farmhouse, a scarecrow and the Venus Fly Trap among other symbols. Even the control panel, the layout and the surroundings are all inspired by the farm life. Players will also enjoy a very entertaining intro that tells the story of the game in wonderful graphics.

The game’s wagering range varies between 0.02 credits and 150 credits. The players will place these wagers at the bottom by toggling between the available coin sizes, number of coins per each line and the number of paylines that they want to activate. The players can choose a coin size that varies between 0.02 and 0.50 and players can place from 1 coin up to 5 coins per each single payline.

The game comes with plenty of bonus and rewarding features that enables players to enjoy a fun filled and a lucrative experience. For example, the game has a free spins round. This round is called the Feed Me Spins round. The players can trigger this round whenever they get three food sacks on the reels of the game. The Do Not Trespass sign is the scatter symbol of the game that rewards players with instant scattered payout when a minimum of 3 appear on the reels. These are only two of the rewarding features of this amazing 3D game.