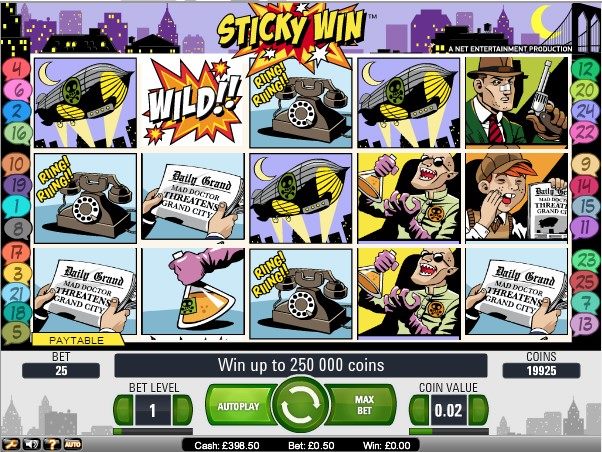 Jackhammer is a fantastic slot game that is developed by the team at Net Entertainment. One of the most distinctive features of the game is the scatter symbol. The scatter symbol of this game is the bomb. Players who get 5 to 8 scatter symbols on the reels will win from 10 to twenty-five free spins on the game. The game also has a jackpot of 250,000 coins. This jackpot is triggered by 5 Jack Hammer symbols on adjacent reels.

Jackhammer is one of the very successful games by Net Entertainment, it was a huge hit in the online world that Net Ent felt the need to make a sequel which was also a great hit, it was called Jackhammer 2. This game invites players to go into the comic world and join a super hero, Jackhammer as he fights crime and stands in the face of mobs and thugs. Players will quickly catch the comic theme of the game as they will see that the entire design of the game as well as the symbols come in the form of comics. This is a pretty unique and a new theme that players cannot find anywhere else on the web. The game is filled with wonderful graphics that ensure players a very visually entertaining experience. The symbols, the interface and the control panel are all crafted with excellence. Players will also enjoy the fact that each reel spins separately, which adds to the fun and excitement of the game. Like any Net Ent Video slot, the game is packed with its own list of rewarding features and special symbols that ensures players a very rewarding gambling experience. Players can enjoy this thrilling game here for fun or they can head to Mr. Green casino among others to enjoy the game for real money.

Get ready to go into a comic book and live the world of comic book super heroes. This game will allow players to do that as they accompany the brave super hero in his quest to stand against corruption and evil. Players will go deep into that theme with the awesome graphics and sound effects that the game offers. The reels, the background and the symbols are all inspired by comic books with black background and white drawings. The game has 5 reels that spin separately and 25 lines. The symbols that appear on these reels and lines include the super hero, a telephone, newspaper, a poisoned potion, a car, a newspaper selling boy and a Wild bang. Right underneath these reels, players can find the wagering options and the control panel of the game that comes in the shape of green buttons.

Players will find two wagering options available for them to set their wagers. These options are the betting level as the game has 10 different betting levels and a coin value that varies between 0.10 and 1. This creates the game’s wagering range that has a minimum of 0.01 and a maximum of 250 per spin on the video slot.