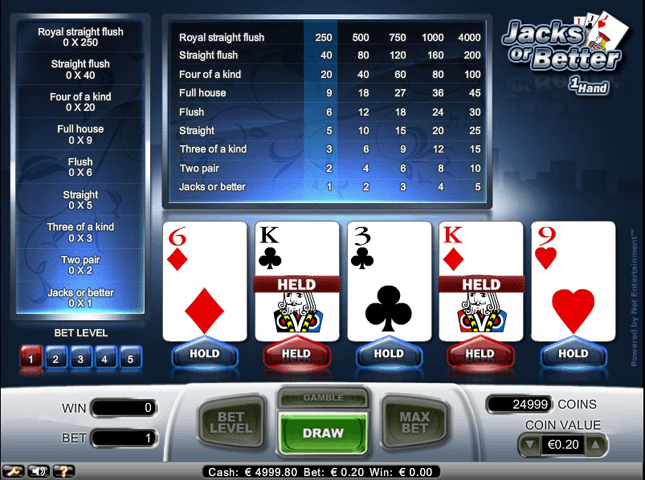 Jacks or Better is a classical game. The unique thing about this game is that in order to get paid for a pair, it has to be jacks or better, hence the naming of the game. It is a very fast paced video poker game that has millions of fans around the world. This game is developed by Net Ent so it can be found at many casinos including Mr. Green Casino.

Jacks or Better is one of the most commonly played video poker games. This game is powered by Net Entertainment, one of the biggest and most accredited software developers in the internet gambling industry. As all of the Net Ent powered games, this video poker game has wonderful and stunning visuals and equally enchanting digital sounds. The game is targeted by poker fans who are seeking a stress free poker game with a low minimum paying hand. This is because the minimum paying hand for this game is a pair of jacks. Also, the players will only be rewarded depending on their poker hand, they will not have to beat other players’ hands and they will not feel the need to bluff weak hands and risk.

The gaming procedure resembles any video poker game. The game starts after the players set their desired wagers. They will be able to place these wagers under the cards of the game. They will toggle between the different options and wagers in order to place their stake. After the players place the stakes, they will be able to initiate the game when they click on the deal button. This button alongside other buttons can be found right under the cards, they represent the control panel of the game.