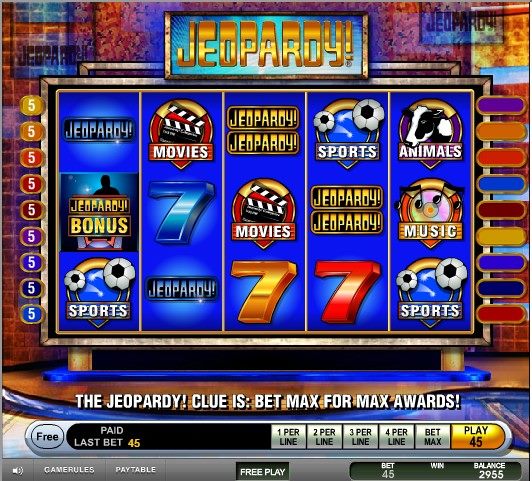 Jeopardy is a video slot that is themed around the popular TV show, Jeopardy. The game is a five-reeled video slot with nine paylines that is developed by IGT. It has many characteristics and bonus rounds that reward players until they are satisfied. Some of these rounds are the Jeopardy Bonus Feature , Final Jeopardy Bonus Feature  and the chance to utilize wild symbols in order to multiply the payouts.

Do you enjoy TV game show, do you enjoyed watching them, if so, then you are in for a surprise. This video slot machine is dedicated to all of the fans and lovers of one of the most popular and most commonly watched TV game show, Jeopardy. If you always wanted to be on that show but didn’t succeed, this is your chance to be a part of that awesome game show through this wonderful IGT developed video slot. This game will take players on a great Jeopardy themed video slot experience where they can have fun and win great rewards, just like the game show. Players who are looking forward for this great experience can enjoy it here for fun without betting real money or they can head to online casinos that are powered by IGT in order to play the game for real and win real cash. The list of prestigious IGT casinos includes the international and accredited casino, Mr. Green.

The game is themed around the game show, this is why the 5 reels of the game and the 9 paylines that it boasts are filled with symbols that are inspired by the game show. This includes the categories that the game show offered to its contestants such as animals, movies, science, music and sports. It also includes the 1 bar, 2 bar and 3 bar symbols but instead of bars, there are Jeopardy logos. They also include three colors of sevens, red sevens, blue sevens and golden sevens. On the left side of the reel, players will see the paylines that the game has. It is also where players will choose the pet per line as well as deactivating the lines. Under the lines and reels of the game, players will see the wagering board of the game. It is where players will determine their bet per line and spin the reels in order to start the game.

The game’s wagering range is determined by the bet per line that players will place on each line and the number of lines that players want to activate. The bet per line can be determined at the bottom as players will see the different bets per line possible that vary between 1 and 5. Players can also place different bets on each line at the left side of the reels as well as activating and de-activating certain lines.

The Jeopardy Bonus symbol can trigger the Jeopardy Bonus round if players get three of these symbols on an activated payline. The game also has a wild symbol, which can substitute for any other symbol excluding the bonus symbol of the video slot. 5 of these wild symbol would also give the highest payout of 25,000 if players have placed the maximum bet on the activated payline. 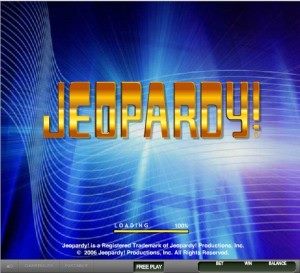 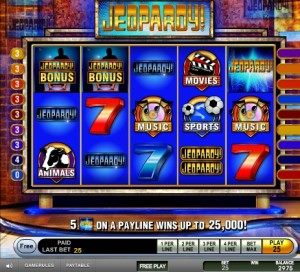 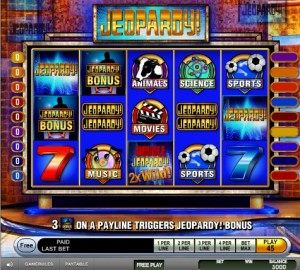