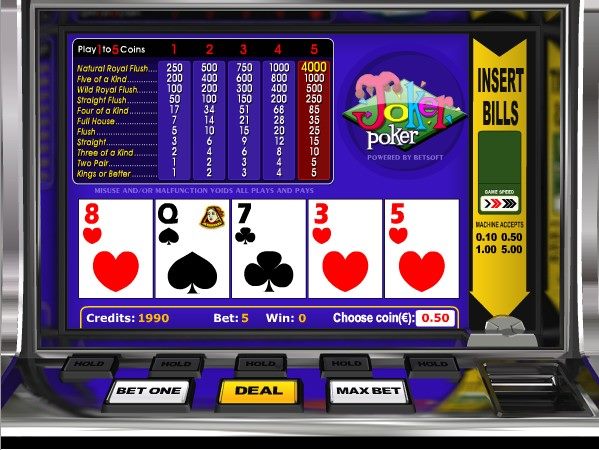 Joker Poker follows the same theme and style of classic video poker games. This game was offered by Betsoft gaming in 2011 and it became an instant hit. The game has the same features as the normal video poker game. It has a gamble game, varied coin sizes and a fair betting range. The distinctive feature of this game is that if players get a joker, it can be used instead of any other card to make a better poker hand.

Betsoft Gaming is known for its rich selection of video poker variants. The software developer makes sure that each game stands out from the rest by adding unique features and twists to each video poker variant. Joker Poker comes with a very unique twist, it comes with a wild card, the Joker. So players who get a Joker, the card will be able to fill in for any other card from the deck of cards in order to aid players in achieving a higher paying poker hand. The game has wonderful yet simple visuals and equally amazing sound effects. All of this allows players to enjoy the game to the fullest. Since the game is powered by Betsoft, players can enjoy Joker Poker at any of the casinos that are powered by the developer such as Mr. Green casino among others. This game was released by Betsoft two years ago in 2011.

The game will start when players place their bets. These bets can be determined at the bottom through the wagering board of the game. It is where players will control everything during the game play. There are five different bets available, players will click on the “bet one” button in order to toggle between the available bets, as for players who want to palace the maximum possible wager can click on Max Bet. As players choose their wager, the available payouts will be highlighted in the paytable according to the betting level.

After the players place their wanted bet, they will start the game and click on Deal. They will get five cards in the beginning. This is not the final poker hand since the game is a 5 card draw poker at heart, players will choose the cards that they want to hold, the cards that they think are good to be the base for their next hand. They will do that by clicking on the cards, when they do that, the card will have the word Card Held and will have an orange outline.

After players do that, they will click on deal once again. They will then get cards that will replace the cards that they did not wish to hold. This will create the final 5-card poker hand that will determine their reward. The players will be rewarded according to the poker hand that they succeeded in achieving as well as their wager and the paytable. The paytable can be found at the top and it will show the different hands and their payouts. The game has a minimum paying hand of a pair of Kings, this means that players will have to get a poker hand that includes two Kings at least so they can earn a reward. The game also has a speed controller that enables players to control the speed of the game and the dealing of the cards.