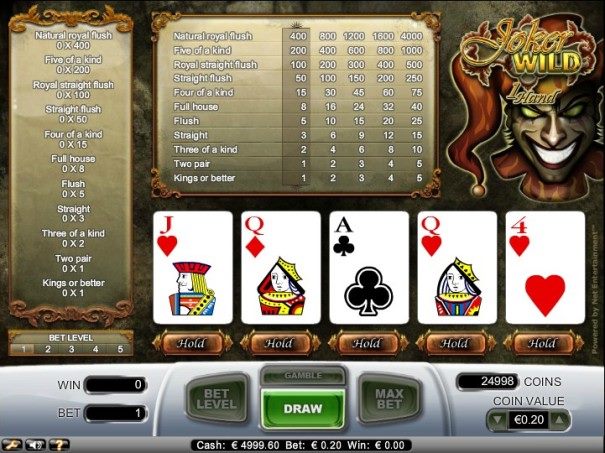 Joker Wild is one of the simplest forms of video poker on the market today. It is a normal video poker game where players get awarded according to a paytable, depending on their poker hand. The twist is that jokers are introduced to the game play and they act as wild cards as they can replace any card in order to make a stronger hand.

Net Entertainment is known for its great variety of games that it offers in every casino gaming genre. This game is one of its great collection of video poker games. Video poker game are known for being a great success among poker fans because it provides them with a straightforward and a simple poker game where they will not need to bluff or beat other poker hands, they just need to get a good hand and they will be rewarded according to that hand. This game has the usual high quality card and dealing visuals of Net Entertainment powered games accompanied by great sound effects. The players who are looking forward to play this game for free will be able to do that here but if they wish to play the game for real money, they will be able to do that at Mr. Green Casino among other casinos that have the power of Net Ent behind them.

The gaming procedure is similar to any video poker game at land based or online casinos. The game starts after the players place their wanted wagers. The players will not be able to change or edit that wager once they start the game. The wagers can be placed by toggling through the available wagering options that can be found under the game cards.

Once players place the bets, they will start the game by clicking on “Deal” which can be found at the middle of the screen. After players click deal, they will get five initial cards. Players will then be able to choose the cards that they wish to hold, these cards will be the base for the final poker hand that they will be rewarded according to. They can choose these cards by simply clicking on the hold button under each card in order to hold them.

The players will then click on Draw in order to get replacement cards for the cards that they did not want to hold. Any cards that players did not hold will be replaced with other cards once they click on Draw. The five cards that the players will have now represent the final hand that they will be paid according to. There are three things that determine the payout. The first thing is the wager that the players have placed, the second thing is the paytable of the game and the third thing, the hand of the players.

The game has a wild card, which is clear from the name of the game, and it is also clear from the name that the wild card is the Joker. Whenever players get a joker, it will act as a wild card as it will replace any other card in order to form a better poker hand in order to enable players to achieve a higher payout or to form a qualifying hand. The minimum paying hand for this game is a pair of Kings.