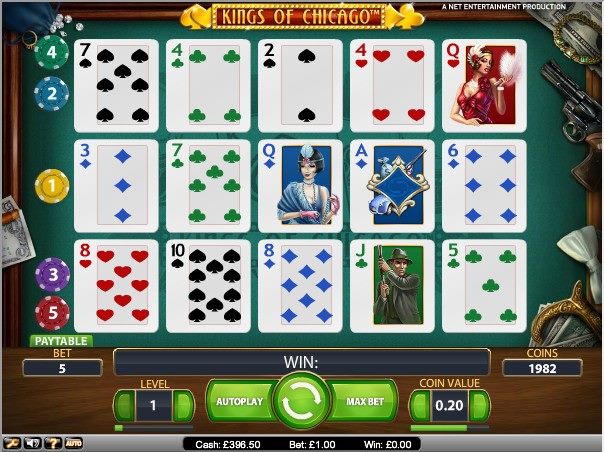 Players who are card game fans and want to play slots, Kings of Chicago by Net Ent is the game for them. It is a video slot machine that is inspired by card games. This is why all of the symbols are well-crafted cards from a playing deck. It is a brand new concept that will appeal to a large number of players. Even the reels are dealt and not spun, just like card games.

Kings of Chicago is a unique video slot machine that mixes between two of the most popular games in the online industry. These two games are slot machines and poker. This is because the game is a video slot machine at heart but the symbols and the winnings are all themed around poker, this will be discussed in more details later. The game is also themed around the illegal backroom gambling games that Chicago is known for, this is why players will notice that from the design and the car symbols on the reels of the game, so to speak.

The game is from the amazing portfolio of Net Entertainment, this is why players will enjoy a very visually entertaining experience that is accompanied by an equally outstanding audio effects and a hefty sum of rewarding features and one unique game play and setup.

The game is themed around backroom poker games. This is why the reels come in the form of cards, from a regular deck of cards and the reels or the cards are found on a green table. The cards (reels) do not spin or tumble but they are dealt, which is pretty fitting to the game’s theme. Players will also see poker chips, guns and pictures surrounding the game’s reels. The cards are dealt in 4 horizontal rows and 5 vertical columns (the reels)

All lines are activated at this game, as players will only choose a coin value and a betting level. There are 10 betting levels and coin sizes that vary between 0.01 and 1.

The game’s wild card is obviously the joker, since it is the wild card at most card games including poker. This wild card can replace any other card in order to help players get a higher poker hand which will result in a better payout. The game has a scatter card as well, this card is the King scatter card. 3 of these cards can trigger the free deals round which is the equivalent of a free spin round.