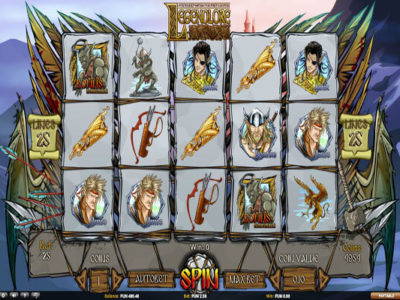 LegendLore is a new 1×2 Gaming powered pokie game that has a lot to offer to players. This includes an action packed ride with many rewards. LegendLore comes with many special features and bonuses, as well as wonderful graphics to create an immersive and a rewarding game.

LegendLore is one of the latest games to be released by 1×2 Gaming. The new game has a 5 reel setup that is home to 25 wager lines. The game invites players to enjoy a great ride that takes them into the fairy and fantasy world that is full of elves, trolls, warriors and hunters. Players will enter that action and reward packed world to enjoy an adventure of a lifetime. That is not all, as players will also get to claim plenty of fortunes as their own from this world’s prizes and treasures. Players will be able to do that as they join the creatures and search for these treasures.

Players will claim all of this through the line payouts of the game, as well as the special features and icons that the game has.
The visuals of the game depict the fantasy theme of the game. This is why across the game’s reels and lines, players will see four warriors from different races appearing as symbols on the reels. They are Legatus, Derec, Arior and Caldor. They would also see a troll, a king and a beautiful Elvish female warrior called Silvertawn. Other symbols include the mythical griffon creature, bows, arrows, weapons, orcs and more. These symbols will transform into animations when they are a part of a winning combo.

The game has 25 lines that can give generous line payouts. Besides the line payouts, players will find three special icons that they can take advantage of. The first of these icons is the scatter king. This scatter king icon would give players scattered rewards. Players can claim a reward that is equal x2 – x5 the placed bet. That is not all, as the scatter king con can trigger the free spins round that gives players 10 free games on the pokie. They will need at least 3 scatters in order for that to happen. During the free spins, all wins claimed will be multiplied by x3.

Last but not least, the game has a wild icon. This wild is the Elvish warrior, Silvertawn. This icon will replace any of the other non-special icons on the game’s lines to help players create the biggest payout possible.