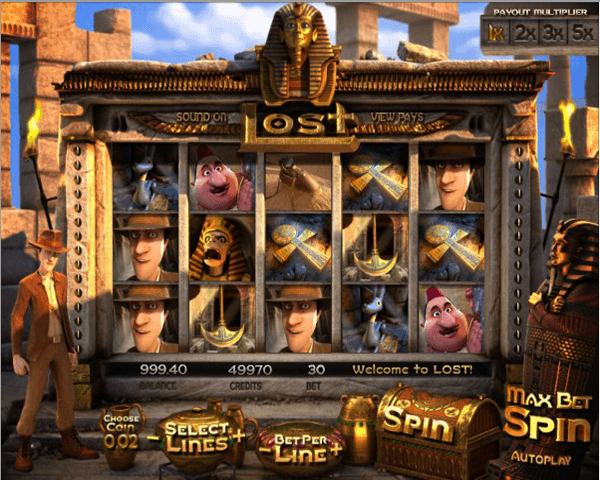 Lost is a five reeled non progressive 3D slot machine that has thirty paylines. This game is developed by Betsoft Gaming. The game follows a group of explorers who get lost in the tomb of an ancient Egyptian king. This is why the symbols that appear on the reels include golden treasure, a mummy, the explorer and other related symbols. The game also offers players the chance to hit a jackpot that has a maximum win of 7,500 USD.

There are many video slots that are themed around the ancient Egyptian culture and the times where the Egyptian Pharaohs roamed the lands. This did not stop Betsoft Gaming from developing this game which is also themed around Egyptian Pharaohs as this game presents the theme in a very unique, scary and an intriguing way. Instead of the usual pyramids and symbols, this game will take players into the crypts and into the tombs of these pharaohs as they accompany a tomb explorer in his task. The players will also accompany an evil mummy that is out to get them. All of this is presented to players in wonderful 3D graphics, outstanding features and vivid sound effects that Betsoft Gaming is known for. The game can be enjoyed at many casinos that are powered by Betsoft such as Mr. Green.

The game is presented in a simple setup of 5 reels accompanied by 30 lines that players will be able to place their wagers on. The symbols appearing on the reels and paylines are inspired by the theme of the game, which is the ancient Egyptian culture and the Pharaohs. This is why the symbols appearing on the reels include a Pharaoh, the explorer, a mummy, ancient Egyptian symbols, a scarab, a snake and other monuments from ancient Egypt. These symbols, as any 3D Betsoft powered video slot will turn into exciting animations when they are on an activated payline that scored a winning combination of symbols. The reels themselves are located in an ancient Egyptian temple with Egyptian symbols, signs and columns surround the game’s reels.

This is not all as the players will see the explorer on the left side of the screen as he interacts with every play and combination of symbols that players succeed in creating. Even the buttons that the players will click on in order to set their wager is themed around the Egyptian culture. This is why they come in the form of Egyptian treasure boxes and the max spin button comes in the shape of a mummy casket.

The game is filled with plenty of rewarding features and bonuses. These bonuses can be viewed at the paytable of the game alongside the normal line payouts. For example, players who get the monkey symbol on the 4th reels will trigger the monkey click me bonus that gives instant rewards. Also, four ancient Egyptian eye symbol would trigger The Mummy’s Tomb Bonus that is very rewarding.