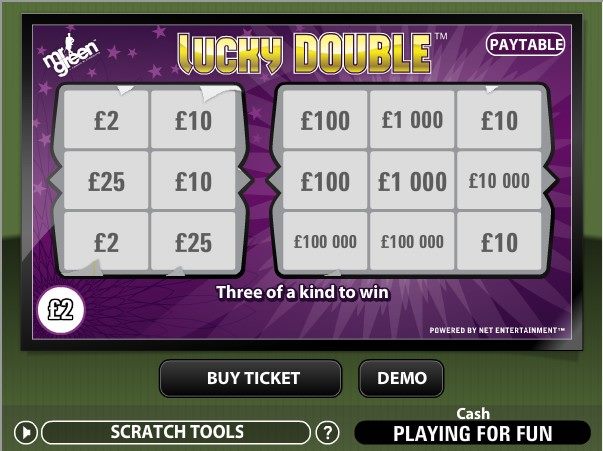 Lucky Double is a very unique scratch card game from the vast and varied collection of scratch card games that are offered by Net Entertainment, also known as Net Ent. This game enables players to play two tickets with the price of one by giving them two games in the same card. This means that players will have two chances of winning instead of one like other scratch card games. The game also provides players with the ability to choose the scratching tool that they want to use in order to scratch the cards. All of this makes a fun, exiting and a rewarding game that is favored by a lot of online players. The game can be enjoyed in practice mode for fun here, as for players who want to try the game with real cash can head to Mr. Green Casino or any other internet casinos that are supplied with games by Net Entertainment.

The game has a very captivating visual setup with a purple background and the two cards on it. At the bottom, the control panel of the game is located. This is where players will be able to control the sounds, choose a scratching tool and control the game’s settings. As for the paytable that will enable players to view their odds can be found on the top right area of the game.

The game starts as players buy a ticket which will cost them 2 credits each. After they purchase the ticket, they will choose the scratching tool they want to use to scratch the tickets. There are 3 tools available, these tools are a green chip, a golden star emblem and a golden object with a drawing on it. Players will then start to scratch one of the two cards. The one on the left has six squares, each square has a money amount that varies between 2 and 100 credits. Players who are able to get three matching money amounts will claim that amount. After they finish scratching the small card, they can head to the big card on the right. This card has a 3 x 3 grid that contains 9 squares. Like the first one, each square has a money amount but this one varies between 2 and 100,000 credits. The same rule is applied, if players succeed in getting three matching money amounts, they will be able to claim that money amount. After players finish, they will click on Buy Card in order to get a new card and enjoy another round.