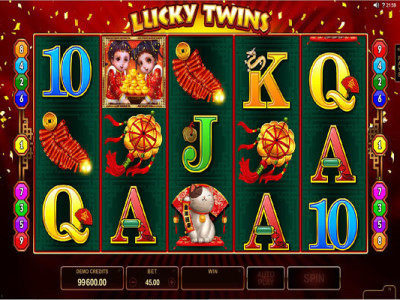 Lucky Twins is one of the newest games to be added to the online gaming market and to the ever changing and increasing portfolio of Microgaming games. The game has an explosive and a fun theme, as it takes players to the Far Eastern world; this is why players can expect to see many visuals and icons that are inspired by that culture.

Other than the exciting theme of the game, the pokie comes with wonderful visuals and sounds which helps players in getting immersed deep into the theme of the game. It is also packed with many great prizes that the 9 lines have to give, as well as bonus features and special icons for players to take full advantage of.

Lucky Twins is a Microgaming pokie machine, which automatically vouches for the game’s visuals, sounds and its ability to provide players with a truly remarkable and an immersive experience. Players can also expect to find plenty of winning chances and bonus features, despite the fact that the game has only 9 lines.

This pokie is a great addition to the already rich and varied gaming selection of Microgaming, and as the rest of the games, it can be played right here for fun as players can spin its reels, endlessly, with demo credits. This way, they can give the game a test drive before placing real bets on the casinos that host the game.

Lucky Twins has an Asian theme that takes players to the Far Eastern lands here they can enjoy all of the exotic aspects of this culture. They will also get to claim its fortunes as their own as they place the bets and spin the reels. The game has a 5 reeled format that is home to 9 bet lines, while to some, this might look like a small number of lines, but the game is pretty rewarding.
Since the game has an Asian theme, it is no surprise that the symbols that are going to be landing across the reels of the game include Golden and Silver Asian artifacts, Chinese fireworks, Asian golden coins, the Lucky Twins and other symbols.

As players click on the Bet Cell, they will see the two betting options that the pokie holds that create the betting range. These options are the number of lines and the value of these coins. The created betting range varies between 0.25 and 45 credits.
Bonus Features

The game has a wild symbol, which is the Lucky Twins symbol. This symbol would act as a substitute icon that would replace all other icons on the game’s reels to help players claim a payout. It will not be able to stand in for the scatter icon, which is the Golden Artifact. Speaking of the scatter, it would give players scattered multiplied pays when they get from 2 to 5 scatter icons anywhere on the reels.