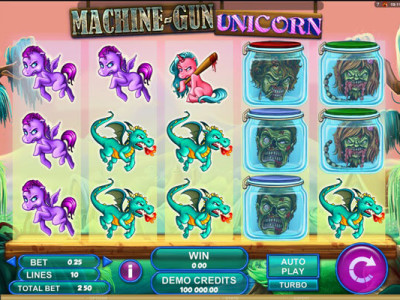 Genesis Gaming, through Microgaming’s Quickfire gaming platform offers players this astonishing and unique game, Machine Gun Unicorn. The game takes players on a pretty unique gaming experience that takes them into a wonderful world that is full of prizes and magical creatures. The game offers players 5 reels and multiple win lines through which they will be able to earn plenty of rewards and trigger many bonus features and rounds.
The game is presented in astonishing visuals and sound effects that will help immerse players deep into the theme of the game, which is something that all Genesis Gaming slots are well known for.

Machine Gun Unicorn is a very bold name that takes players by surprise, this is because machine guns and unicorns are never in the same sentence, but in this game, it makes perfect sense. This is because the video pokie machine is about the fairy tale land of Unicorn and Dragons that gets attacked and infested by the undead zombie horde. This is why all of the magical and peaceful creatures of this land must carry weapons, including a machine gun, in order to fight off the horde and free their land from this plague.

The game has a great set of line pays that the different symbols has in store for players, as well as bonus symbols and features that are quite lucrative. All that players need to do in order to check out these payouts and special features is spin the game with demo credits right here. This gives them the ability to try out the game without making deposits to give it a test drive.

The theme of the game is pretty original, as it is about the fairy tale land that has Unicorns of different colors and dragons. These creatures live peacefully, but when the zombie undead horde comes knocking on their doors to take over that magical place, they wield the weapons they need so they can fight back. This is why players will begin the gaming experience by entering that magical fairy tale world through the clouds then they will see the reels that has unicorns wielding different weapons, zombies, dragons and much more spinning on the reels of the game. The game is offered in 5 spinning magical reels that host a total of 10 bet lines through which players will earn multiple rewards.

The Machine Gun Unicorn is the special icon of this game. It can act as a substitution symbol that will stand in for other icons on the game’s reels to help players get paid. It would also activate the symbol bombs when it lands on the screen (only on the 3rd reel), as all zombie head symbols will explode giving great rewards.