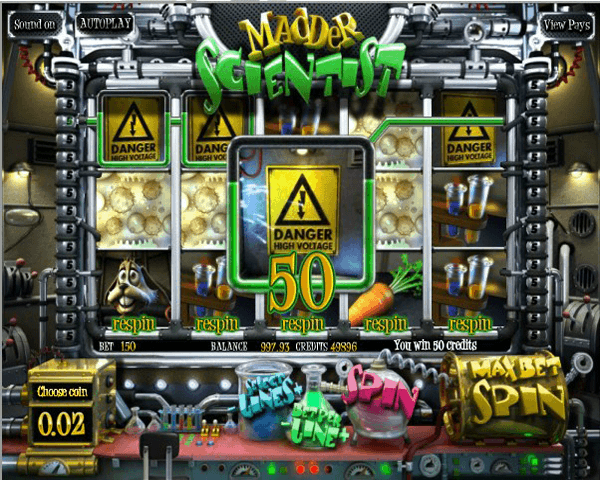 Madder Scientist is a five reeled slot machine. This 3D slot machine has amazing graphics and fabulous and vivid sound effects. This slot machine offers players the chance to be rewarded with a jackpot that pays out 1,250 USD. This game has five reels and thirty paylines. The wagering range of the game varies between 0.02 USD and 75 USD. The game has a Re spin feature that allows players to choose to re spin a specific reel in order to get a better combo.

Madder Scientist is a 5 reeled video slot machine that is themed around the experiments of a mad scientist alongside his dog and hot assistant. The game invites players to go into the laboratory of this mad scientist to join him in his wild and crazy experiments. Madder Scientist is a 3D non progressive video slot by Betsoft Gaming, so players can except high quality 3D graphics, outstanding audio effects and one heck of a game play. The game is very fun and it does a great job in buildings a world in which the players are immersed into. Players can try this game for fun in practice mode, right here on this page, or they can go to any of the Betsoft powered casinos such as Mr. Green in order to place real money wagers on the game. Either way, players will be entertained and satisfied as Betsoft Gaming offers players a visually pleasing and a rewarding gambling experience through this 3D video slot machine.

The theme of the game is apparent right from the start through the intro that players will surely enjoy, then the loading screen and when they open the game, it will all become more clear as the symbols, the design, the control panel and the reels are all themed around the crazy mad scientist. The symbols that appear on the 5 reels and the 30 lines of the game are all themed around the crazy experiments of the scientist. This includes test flasks, tubes and the scientist himself alongside other symbols. These symbols will turn into 3D animated symbols when they participate in the creation of a winning combo on an activated line.

Under these reels, players will find the control panel of the game which also comes in 3D graphics, they will find plenty of options for their wagers, the spin button and the bet max button. All of these buttons are also themed around the scientist and his experiments.

The video slot offers players plenty of rewarding features and bonus rounds that enable them to claim great payouts. There is a Click Me Bonus that players will be able to activate whenever they get 3 beaker symbols on the first, third and fifth reel of the game. Once they activate it, they will start selecting beakers so they can claim instant cash payouts.