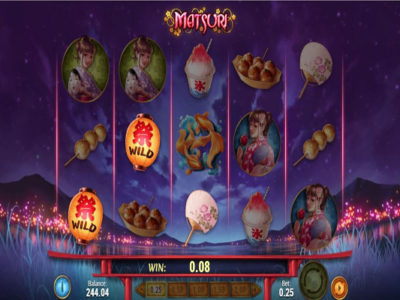 Matsuri Pokie is the brand new game to be released by Play n go. The new pokie takes players on a great ride that takes them into the Japanese culture as they enjoy its celebrations and festivals. Matsuri means a festival in Japanese. This is why players will see many aspects of the festivities of Japan. Players will enjoy such celebration while claiming their own share of the great fortunes and golden rewards that the game has to offer the players. The game has 25 wager lines that are spread across 5 reels of pure Japanese fun and rewards.

Play n Go’s newest game has made it to the market and it is proving to be quite successful. The new game is Matsuri and it has 5 reels with 25 bet lines. The game hosts multiple special features and icons that can make the players’ stay at the game worthwhile. The game also comes with a fantastic theme that is rewarding and fun, as players join in on the fun and the rewards of Japanese celebrations.

Check what the game has to offer right here for free, and get to know what you can expect before placing real money bets on the casino game.

Matsuri the new Play n Go slot has a standard format of 5 spinning reels that host a total of twenty-five bet lines. The game has a wonderful theme that invites players to go to the Japanese civilization and get to know all about their Matsuri, which means festivals, which explains the title that the gaming developer has chosen for the game.

The game’s reels and lines depict the theme perfectly. This is that’s to the visuals of the game, the music and the sounds. The symbols that will appear across the reels and the lines of the game are inspired by the Japanese celebrations. These symbols include different Japanese sweets, a wild ornate lamp, two sexy Asian ladies wearing a kimono, flowers, a hand fan and more.

The game’s wagering range is determined by the set of fixed bets that players can choose from under the reels. These bets vary between 0.25 and 100 credits for each spin.

The bonus features and the special icons of the game start with the wild icon. This wild icon is the paper ornate lamp. This wild can replace all of the other symbols appearing across the slot’s reels and lines. The wild symbol would help create the biggest payout possible. It will not replace the scatter symbol. This symbol is none other than the Japanese mask. This mask can trigger scatter pays in addition to activating the free spins round. There is also a bonus round that becomes active when players get 3 golden fish icons on the 3 middle game reels.