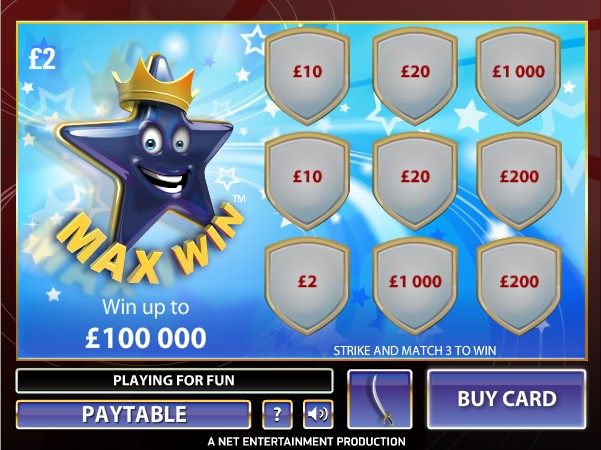 Max Win is a scratch card game that is presented to players in a very new and an innovative way. Instead of the usual card scratching, players use a sword in order to strike on shields in order to reveal the hidden money amounts. Each ticket costs $2 and it has a maximum payout of one-hundred thousand. Of course, players will have to get three matching amounts so they can be rewarded.

Max Win is a Net Entertainment powered scratch card game. Like any other online scratch card game, it is 100% about luck as there are no skills needed, it is just about the luck of players. This is why players who want to test their luck usually try these games. This game can be enjoyed with practice credits at this website or with real credit at Mr. Green Casino among other casinos. The game has a medieval theme as the scratch spots as well as the scratching tools are all themed around medieval times such as shields and swords.
The game’s graphics and sound effects are more than amazing. The scratching areas and the weapons that players will use to scratch are amazing as well as the sounds.

At the bottom, the players will see the control board of the game. This consol board includes the credit balance of players, it also includes the Buy Card button that players will click on in order to buy a ticket. It also has the paytable of the game that shows players their odds, the sound control, help and the scratching tool options, which allow players to choose one of the available three weapons to scratch the card. The players will see a large blue starfish that has a happy face on the left and on the right, the scratch card itself. This scratch card is very unique, instead of scratching, the players will find nine shields in a 3 x 3 grid.

Players who want to engage in this game will have to buy a ticket at first. The ticket will cost them 2 credits each. After players make the purchase, they will then choose a scratching tool, or a weapon. There are three weapons that they can use, these weapons are a sword, a cutlass and a morning star, all of these weapons were used in the old ages. They will then use the weapon they chose in order to strike the nine shields in the 3 x 3 grid.