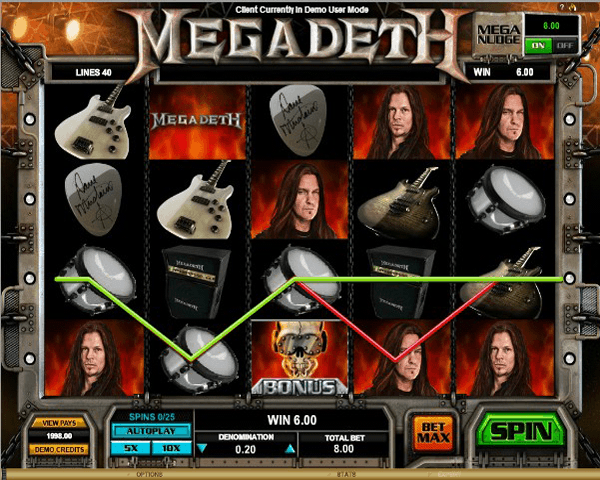 Megadeth is a five reeled non progressive video slot machine that is brought to online casinos by Leader Games. The game has numerous rewarding features. The game is themed around the known metal band that has the same name.  The game comes with a scatter symbol, a wild symbol and a jackpot that pays 100 USD. Players can also choose to double their winnings by playing the gamble game.

Megadeth is one of the many fantastic video slots that are provided to players at Mr. Green Casino. The game is developed and designed by Leader Games. Although Leader Games is not one of the most commonly known software developers but the game is of high quality graphics, sound effects and has a lot of rewarding features. The game is themed around Megadeth, the popular metal band, this is why the game is dedicated to all of the metal music fans out there who enjoy listening to the hard tunes of Megadeth. This is why the game is conveniently named Megadeth and this is also why players will find plenty of metal related symbols and Megadeth related symbols spread on the reels. Not only that as players will be able to enjoy the music of Megadeth at the background. All of this makes for a very entertaining and a pleasing gambling experience that is unmatched anywhere else on the web.

The game is dedicated for metal listeners, this is why the entire game and all of its aspects are themed around metal and one of the most popular metal bands, Megadeth. The game has 40 lines and 5 reels. The symbols that appear across these reels and these lines are all metal and Megadeth related. These symbols include different kinds of guitars, a drum set, a base stereo, the skull bonus symbols, the Megadeth fiery logo and icons that have members of the band.

There are not any wagering options available for players at this video slot machine, there is only one option which is the size of the coin. The number of lines is fixed at 40 and players can only place 1 coin per line. The available coin sizes range between 0.01 and 0.20, multiplied by the number of lines (40), the wagering range results in being between 0.80 and 16 per spin.

Vic Rattlehead is the Wild symbol. It can substitute for any other symbol to help the video slot players achieve a winning combination of symbols on any of the 40 lines of the game. The game’s bonus symbol is the fiery skull, which appears on specific reels. Players can know more about the bonuses and the lines through the paytable of the game. The game also has a gamble game that players can choose to play in order to get a chance to double what they have won.