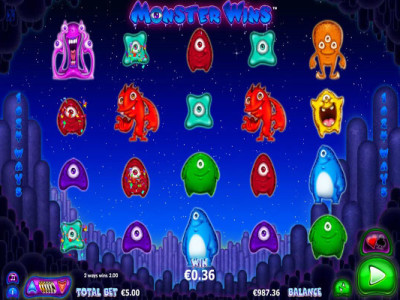 Monster Wins is a highly rewarding Next Gen Gaming powered game that was recently released by the gaming developer. The game comes packing a lot of winning opportunities for the players, whether through the regular payouts, or with the help of the special symbols and the bonus features that the pokie holds, all of which can be viewed at anytime during the game play by opening the paytable.
Monster Wins has a cartoonish feel to it, which affects its symbols and visuals, which add to the friendliness of the theme. This provides players with a tense free gaming experience that they will surely enjoy. Enjoy the game right here for fun with demo credits before placing any real money bets on it, so you can see what it has to offer.

Monster Wins is a Next Gen Gaming pokie machine that has a five reeled setup that comes hosting a total of 1024 ways to win. This is far more rewarding than the traditional line based formats that offer players a smaller number of winning chances. The game is called monster wins as it takes players on an alien adventure as they join a group of alien monsters. These monsters are friendly and colorful and they are here to help players claim as many fortunes and rewards as they can. The game is packed with plenty of winning chances as well as special features and symbols that players will take advantage of during the game play.

Monster Wins has a five reeled format that is home to 1024 ways to win. This means that whenever players manage to get 3 matching icons from left to right in any position, they will be able to claim a payout. All of the symbols that would appear on these reels depict the different monsters that players are going to join in this alien themed experience. These monsters are not scary and deadly, but they are friendly monsters who want nothing more than rewarding players with everything they’ve got.
The monsters include the blue multi eyed blue monster, the one eyed red monster, the purple monster and much more. All of the rewards that these monsters can give out can be found at the paytable of the game.

The game’s betting range varies between 0.50 and 100 credits for every spin of the pokie’s reels. Players will find one betting option under the reels in the control panel.

Players will unleash the Boss Monster if a stack of this blue monster icon appears on the 1st reel. Additional boss monsters are going to be revealed causing multiple payouts. There is also the pink bubbly wild that can replace other regular icons to help players claim a prize on the ways to win. It can only land on the 2nd, 3rd, 4th and the 5th reel. Lastly, there is the bonus icon that can trigger the free spins and can also act as scatter to give out scattered prizes.