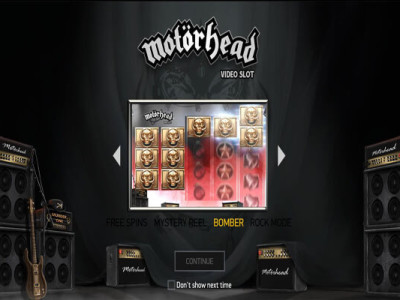 Motorhead is a 5 reeled slot that is amongst the latest games to be released in the internet gaming market. It is the absolute newest game by one of the biggest developers in the industry, Net Entertainment. The game has a unique number of lines, 76. This is thanks to its uneven number of symbols on each of the reels. This does not come as a surprise, since Net Entertainment is known for its innovation and unique games. The game has a rock n roll theme that is inspired by one of the best bands in history, Motorhead. This is why the game has become a huge hit at many online casinos, especially amongst the rock n roll bands in general, and Motorhead lovers in specific.

Motorhead by Net Entertainment is a five reeled game that has a rock n roll theme. The video pokie is amongst the newest games by the developer. The game has wonderful visuals, state of the art features, and of course, great winning chances. The game is offered here for fun, so players can check all of the features of the game, its options and more for free, prior to placing real bets. So get ready for a rock n roll themed experience with one of the greatest and most successful bands, while racking up on some great rewards.

Motorhead has a rock n roll theme, which is not a surprise, given the title of the game. So players better be ready to enjoy a truly entertaining and a fun experience that is all about the music and lifestyle of rock n roll. The game has a 5 reeled setup, but the reels do not have the same number of symbols. The first two have 3 symbols, the 2nd 2 have 4 symbols while the 5th reel has 5 symbols. Across this unique setup of reels, players will find a total of 76 wager lines. Players can see the setup of these lines at the paytable of the game.

The game is not only about rock n roll, as it is a tribute to one of the greatest bands, Motorhead. This band was led by Ian Fraser, also known as Lemmy. The game creates the theme through the rock n roll songs of the band that will be playing the background, as well as the visuals of the game.
Bonus Features

The game has a wild and a scatter icon, which are the 2 main special features of the game. The first symbol, which is the wild, comes in the shape of the Ace of Spades golden icon. This symbol would replace all other icons, except the scatter. It will fill in the spot of the icon that can create the highest payout. As for the scatter, it can give free games when 3 of them land on reels, 3, 4 and 5. This will give players 10 free games on the pokie. In addition to these 2 special icons, there is the Mystery Reels feature and the Bomber Feature.