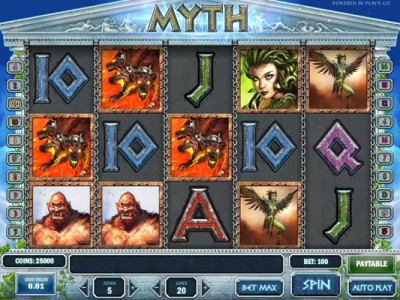 Myth Slot machine is a product of Play n Go that we host here for free. Play n Go might not be one of the biggest companies in the market today, as it does not have its own gaming platform, as it leases its games out to casinos to use them on their own platform. On the other hand, they do offer an extensive set of casino games and slots that come with amazing themes, rewards and an overall high quality gaming experience. The game has a house edge of 3.02%, which means that it has an RTP of 96.98, which is quite high compared to most slots on the market.

Myth slot machine gives players plenty of action that they can enjoy anytime they decide to give this game a few whirls. Thanks to the twenty optional bet lines that the game has that players can place wagers on, as well as the wild symbol, the wild multiplier and the bonus game, the game manages to not only create a fun and an immersive gaming experience, but a highly rewarding one as well. Players can have the chance to view any of the special icons and their features, as well as the regular payout of the other regular slots at the pays page of the game that can be opened with ease with a simple click on the “Paytable” button. Being a Play n Go powered slot also guarantees players a visual experience of the highest quality, thanks to the detailed symbols and high quality graphics of the game’s interface.

The game is entitled Myth and it takes players to the mythical lands of Ancient Greece that is well known for its rich mythology. Players will enjoy a trip to these lands as they indulge themselves into the mythology of this ancient civilization and get to claim their own share of its fortunes and treasures. Players will do that as they place their wanted bet on the lines of the game under the reels and then spinning it.

The symbols that will be landing on the 5 reels and the 20 bet lines of the game are all inspired by the Ancient Greek Mythology as they include Medusa, a hell hound, Hydra, a Greek Soldier, a golden holy grail, evil creatures from Hades and poker card icons.

The betting range of this slot varies between 0.01 and 20 credits for each single spin.