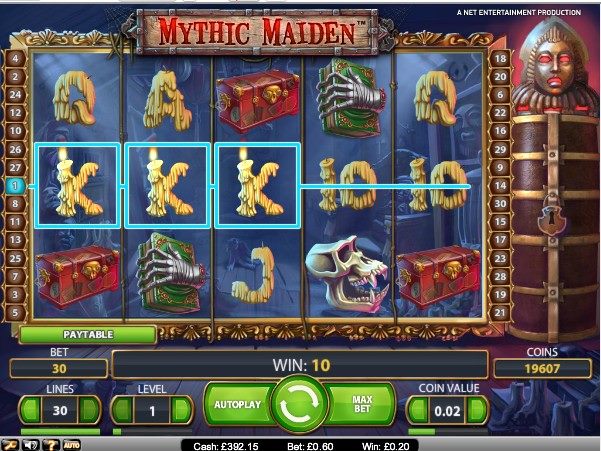 Mythic Maiden is a video slot machine with thirty lines and five non-progressive reels that is developed by Net Entertainment, also known as Net Ent. The game has all of the usual features that can be found at most video slots such as scatters, wilds, a jackpot of 10,000 coins and others. It also offers a free spins feature. This feature is triggered when players get 4-5 scatters. This will give players from ten to thirty free spins on the video slot.

Mythic Maiden is yet another amazing video slot from the developing team at Net Entertainment. The game has a dark and a mysterious theme as it creates a scary world that is a mix between dark magic and voodoo. Players will quickly notice this as they open the game, see the design of the game, the symbols that appear on the reels and hear the scary sounds in the background. All of the visuals are designed with outstanding quality that Net Ent is well known for. This creates the theme of the game that players are easily immersed into so they can enjoy the game. Apart from the quality visuals and the equally astonishing audio effects, players will be able to take advantage a selection of rewarding bonuses & features that will make player’s stay on this video slot worthwhile. This game can be played here for free or at Mr. Green casino among other online casinos that are powered by Net Ent for real money.

Players will quickly catch the theme of the game as they hear the scary background noises that they will hear as they open the game. They will get into the theme even more as they see the symbols and the graphics of the game’s layout and interface. The layout of the game itself is located in a crypt of a haunted place. Players will see skulls and treasure boxes in the background. As for the reels themselves, there are 5 of them and they have a total of 30 lines spread across them. The symbols on these lines and reels include a skull, a large spider, a treasure box, a mystery book, a goblin’s skull and poker symbols from a deck of cards. These symbol are designed to look like old candles so they can be fitting to the game’s theme. On the right side of the reels, players will see a huge chest that has the head of a statue on the top.

The number of lines is not the only option that players will have to choose in order to place their stake. Besides the 20 lines that players will choose from, players will find other options as well. These options are the coin value (between 0.01 and 0.50) and a betting level (between 1 and 10). This creates the final wager that can be as small as 0.01 for a spin up to 150 per spin.

The game has a wild and a scatter icon. The wild icon is the flashing skull. By the power of black magic and voodoo, this symbol can transform into any other symbol so it helps players in creating a winning combo of symbols. The scatter symbol is the blue and yellow light symbol and it rewards players with a number of free spins depending on the number of scatter symbol. It can be re triggered during free spins.