Ned and his Friends 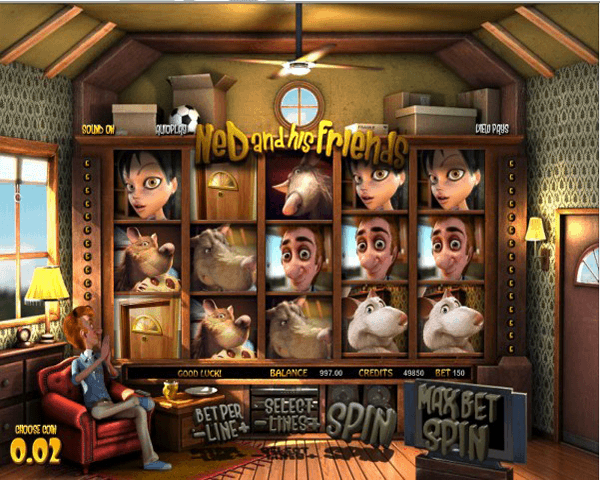 Ned and his Friends is a very unique 3D slot machine. This game has wonderful graphics and amazing sound effects that will take players right into the theme of the game. This game falls in the five reels category and offers thirty different paylines for players to bet on. There is a bonus round that is very interesting. In this game, Ned’s girlfriend faints and your job is to select a rat to sing her a song to wake her up.

Ned and his Friends is a 3D video slot that is developed by Betsoft, in this game, players will join Ned and his friends in a crazy journey and a rewarding gambling experience. Players will join Ned, who is the owner of the house and his friends, who are a group of rats. The game takes place in Ned’s apartment in his living room and the reels are located on a bookshelf. All of this helps players into engaging into the theme of the game so they can really enjoy the game. Of course, being a 3D video slot by Betsoft means that the game offers players high quality graphics and outstanding sound effects. All of that is accompanied by rewarding features and bonus symbols that will enable them to enjoy a lucrative gambling experience that they will not be able to find anywhere else. Players will be able to spin the reels of this 3D video slot right here for fun with practice credit or players can choose to head to any online casino that is powered by Betsoft in order spin the reels for real cash. The casinos that are powered by Betsoft are a lot but one of the most popular casinos is Mr. Green.

The game will take players right into Ned’s apartment, as they will see that the game takes place in his place. Players will see a ceiling fan on the top while the reels are located in his bookshelf. Players will also see Ned himself sitting on a chair right next to the reels of the game. Speaking of the reels, the game has a setup of 5 reels & 30 lines. The symbols that appear on these reels include Ned’s friends who are rats, a door, Ned himself, Ned’s female friend and other symbols. These symbols will turn into animations whenever they participate in creating a winning combination of symbols on any of the paylines that players have activated.

As for the other buttons such as the auto play, the spin button and the wagering options, they can be found under and on top of the reels. As for the paytable, it can be opened at the top right. This will show players the different line payouts that can be earned as well as the special features and bonus symbols that the game has to offer.

The game’s wagering resembles the wagering range of most 3D Betsoft powers slots, it lies between 0.20 and 150 per spin. Players will place a wager by choosing lines, a coin value and a bet per line

Players who get 3 singing Rat symbols on the reels will be able to trigger the Singing Rats Free Spins which will award players with a number of free spins on the video slot.