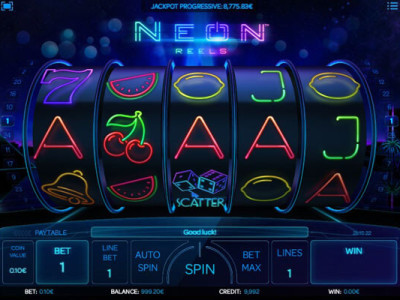 Neon Reels is a five reeled game that is powered by iSoftBet. The game takes players on a greatly rewarding and a fun ride that is like none other. The game has amazing visuals, and sounds, as well as an amazing set of features. All of this result in an overall amazing gaming ride that will have players on the edge of their seat at all times during the game play.

The game has a 5 reeled setup that homes a total of 25 wager lines. In addition to the line pays, the features and the bonuses, the game has a progressive jackpot that can make players much richer in the matter of seconds.

Neon Reels is an iSoftBet powered game that has got a lot to offer to players. This includes a fun ride that has a futuristic theme, as well as many rewards and bonuses, plus a progressive jackpot. The game has amazing graphics that will entertain players and keep them immersed into the experience.
Neon Reels has a wide betting range, which is why the game would be appealing to all types of players. This includes the novice players as well as the high rollers who like to place big bets and claim back great rewards.

Neon Reels has a 5 reeled setup that hosts 25 bet lines. The game takes players on a futuristic ride to the Neon City where everything is outlined in Neon lights, which explains the title of the game. The reels, the symbols and even the control panel of the game also come out lined in Neon. The game also has great animation as the reels spin. Even the background is set in a futuristic city with buildings made out of Neon lights.

The symbols that are going to be appearing for players across the reels of the game are inspired by the futuristic Neon theme of the game, as well as classic fruit machines. This is why the symbols include fruits like cherries and watermelons, and other icons like bells, stars and 7s.

The game has a wild icon that would replace all other icons, but not the scatter or the jackpot symbol, to help players create the highest payout possible. If the wild replaces the diamond icon, it can’t trigger the diamond re spins.

The scatter icon of the game is the neon dice icon. Three of the scatter icons would trigger the free spins round that would give players 10 free spins. There is also the progressive jackpot icon, which is the Hot Reels icon. 5x of these symbols on the same line would trigger the progressive jackpot. Last but not least, there is the Diamond Re spins feature.