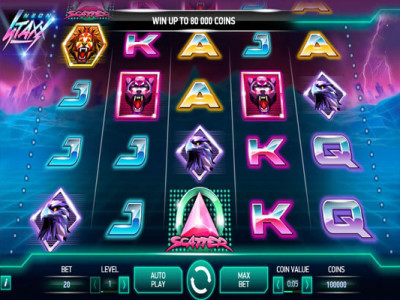 Get ready for an electrifying gaming experience that is awaiting you through the reels and lines of this pokie machine, Neon Staxx, by Net Entertainment. The game is one of the newest games to be added to the rich and the varied gaming portfolio of Net Ent. The game has multiple paylines, and it hosts plenty of high paying symbols that would make the players’ stay at the game quite lucrative.

The game can be played here for free as players place demo wagers on the lines of the game, without ever having to make a real money deposit. This gives them the chance to give the game a test run before they play it for real cash to earn real rewards at any of the Net Ent powered casinos, like the ones that we have right here.

Neon Staxx is an Energetic gaming experience that offers players a unique gaming experience, which is not really a surprise, since the game comes from the rich gaming portfolio of Net Entertainment. So players better buckle up as they engage in this exciting and highly immersive pokie game.

The game also has an arced touch to it, which is apparent in its visuals as well as the sound effects that players will hear during the game play. Last but not least, the game is ultra rewarding, whether through the line pays, or with the help of the game’s special icons.

The game has an arcade theme, which is presented in energy filled icons. The arcade theme is quite apparent in the symbols of the game that come in arcade-like graphics, as well as the audio effects that players will surely enjoy during the game play.
The game has a 5 reeled setup and boasts a total of 40 bet lines for players to place their wanted bets on. The different pays that players will earn through these lines are all listed at the payouts table that the game has, which can be opened as players click on the “i” button. The game has an advanced setup and control panel that comes with a Max bet button, the auto play feature and easy to place bets that ensures players a smooth game play.

Players will place their desired wagers as they go through the control panel’s wagering options. They can do that by toggling through the values of the coins, which vary between 0.01 and 0.50 and a number of coins on each line that varies between 1 and 10 (comes in the form of the Betting Level option). This creates the wagering range that varies between 0.20 and 100 credits per spin.

Neon Staxx has a wild icon, which is the golden wild symbol, which is going to increase the players winning chances by substituting for other non special icons on the reels/lines of the pokie. As for the scatter icon, it is none other than the pink triangle scatter. The game also comes with the Super Staxx feature where random icons will be chosen to appear stacked on the reels.