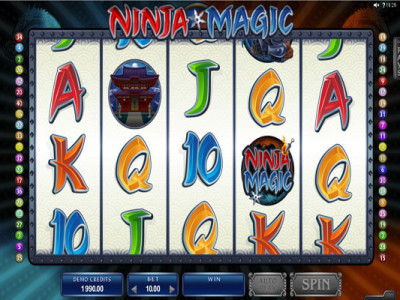 Ninja Magic by Microgaming is one of the least Far Eastern Ninja themed video pokie to be released into the online gaming market. The game takes players on a marvelous and a one of a kind journey into the Far Eastern land as they join the deadly Ninja assassins in an action packed and a rewards filled gaming experience. The game creates the theme through its top notch visuals that are paired by equally outstanding sound effects that would immerse players into the Far Eastern theme.

Ninja magic is already live at many online casinos, like the ones recommended on this page, and it can be played right here for free with demo credit. This way, players can check out what the game is all about and take it for a spin before playing it for real.

Ninja Magic is a Microgaming title, amongst the latest ones to be released by the gaming developer. Ninja Magic comes with an action packed Far eastern theme that would immerse players for a great ride. Apart from the action packed experience, the pokie also come stacked with great wining chances bonuses and features that would make the players’ stay at the game quite rewarding. The game is also quite easy to play, thanks to its clear and detailed control panel, and a clear betting mechanism which results in a truly smooth gaming experience, which is not surprise, given the fact that the game is developed by the team at Microgaming.

Ninja Magic comes with a very interesting and a mysterious theme, as it takes players on a really extensive and an action packed journey into the Far East where they will accompany a group of deadly Ninja warriors on a great ride. The game creates the theme with the visuals, symbols and the sound effects. The format of the game hosts 5 spinning reels with a total of 40 wager lines.

Across the reels of the game and these lines, players will see plenty of ninja warriors and ninja weapons which adds to the authenticity of the experience.

The game’s betting range is determined by the betting options found at the bet cell under the reels. There is the coin size, the number of lines and the number of coins on each line. This results in a wagering range that varies between 0.01 and 50 credits.

The Asian Ninja house is the scatter icon of this pokie, which means that whenever players manage to get 3x of these scatters, they will activate free spins round, with multipliers, depending on the number of scatters.

There is also a wild icon that can replace all other icons to help players claim a prize, except the scatter. This wild icon is the logo of the game. Lastly, there is the scatter pot of gold that can give out scattered rewards.