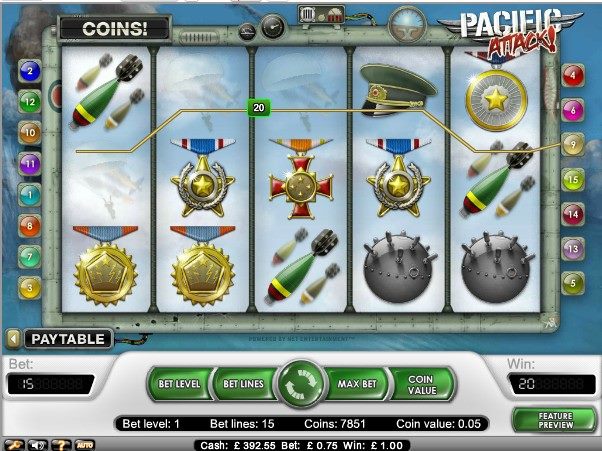 If you ever wanted to be a war fighter, this is your chance. Pacific Attack video slot machine will take you on a jet fighter journey. It is a 15 payline, 5-reeled video slot machine that is developed by Net Ent. It has wild symbols, scatter symbols and a jackpot of 20,000 coins. The symbols are all inspired from the World War II pacific attack such as Bombs, air jets, medal of honors and other symbols.

Pacific Attack is a game that is themed around the aircraft battles that took place during World War II. If you are a big fan of war movies and always thought to yourself that you would like to be an aircraft pilot so you can take a part of these cool battles, this is your chance. This game will allow you to go into these battles through this video slot machine. The game creates the aerial battle world through the design of the game, the sound effects, the visuals and the symbols on the game’s reels. This game is from the Net Ent powered portfolio of video slots which immediately means that the game has the finest graphics and the best game play accompanied by the best and the most rewarding features out there. Players can try the game for fun on this page or they can choose to go to any Net Ent casino like Mr. Green in order to try the game with real money. The game has a lot of bonus symbols and a jackpot that can pay out up to 20,000 coins for lucky players who hit it.

The game is themed around the aerial battles that took place over the pacific like Pearl Harbor, this is why players will see related symbols on the game’s 5 reels and 15 winning lines. These symbols include a pilot, aircraft missiles, a parachute, a mine, an army hat, different medallions, a picture of a lady and an aircraft. Apart from the symbols, players will hear sounds that they would hear in any battle aircraft and as the reels spin, players will see an aircraft in the background before it gets covered with the symbols. Players can view the paytable of the game at the bottom left as they will see a button that has the word Paytable on it. This will show players the different line payout as well as the bonus symbols. Players can win up to 300,000 credits through this game.

The game has 20 different betting levels and coin sizes that vary between 0.01 and 0.20. Add to that the 15 lines that the game has, all of this means that the minimum wager that players can place is equal 0.01 while the maximum wager is fixed at 60 per spin. Players will find the different options that they will go through to place their wagers right under the game’s reels.

The game has plenty of bonus symbols that players can capitalize on in order to earn great rewards. The game has a scatter and a wild icon. The wild symbol is the pilot, it can fill in for other symbols, excluding the scatter or bonus symbol. Speaking of which, the bonus symbol is the aircraft bonus icon, 3 of these symbols on an activated line will activate the bonus round.