Paco and the Popping Peppers 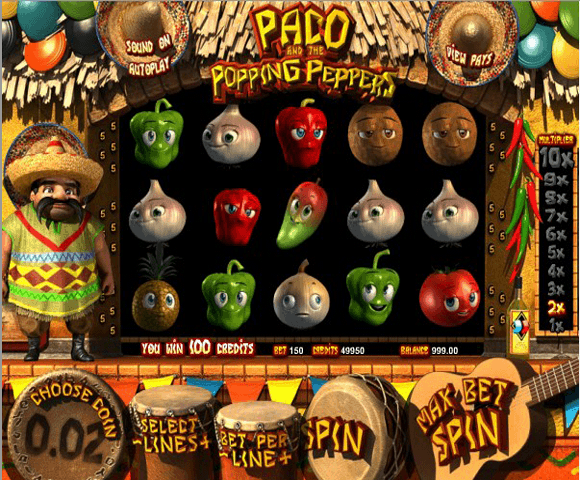 Paco and the Popping Peppers is a five reeled 3D slot machine that is brought to online casinos by Betsoft Gaming. This is why players will be able to find it at Mr. Green Casino among other online casinos. The game has thirty paylines and offers players a jackpot that pays out 2,500 coins. The game has amazingly designed 3D animations and graphics. The game comes with a multiplier symbol and a wild symbol.

Paco and the Popping Peppers is a very fun and a rewarding Mexican themed 3D slot by Betsoft Gaming. The theme is apparent right from the name of the game, as it is named Paco (a Mexican farmer) and the popping peppers. Apart from the name, players will quickly understand the theme of the game as they open it and listen and watch the cinematic intro that the game offers. It will tell the story of Paco and how he represents fun and joy.  The game has plenty of special features and in game features that enable players to enjoy a very fun and an innovative game play. The game is accompanied by a Mexican themed soundtrack in the slot’s background and Paco himself who can be seen at the left side of the reels. This game can be enjoyed here at VegasParadise with practice credits or players can head to Mr. Green casino among other Betsoft casinos to try the game with real money so players can earn real credits instead of practice ones.

The game is themed around a Mexican farmer and Mexican condiments, this is why the game is conveniently entitled Paco and the Popping Peppers. The name “Popping Peppers” is related to the game play as well, this is because this game has a very special feature. First of all, the condiments and the symbols do not spin but they fall from above, second of all, they can explore “pop”. This can happen whenever players get a winning combo that contains similar symbols of Mexican condiments, these matching symbol will explode and other symbol will replace them.  This will give players some sort of a second spin or a chance to win, if they achieve another winning combo, the winning will be multiplied by 2 and the symbols will explode and so on. Players can achieve up to 10 consecutive wins with a highest multiplier being 10x. All of this can happen with one spin.

The game has 5 reels and 30 lines, all of the symbols that appear on these reels include Mexican food condiments, a piñata a Mexican hut and a coconut. Even the control panel under the reels is themed around Mexico as the buttons come in the form of a guitar and a Mexican drum set.

Players will be able to place a bet that varies between 0.02 credits for a spin and 150. They will determine the wager by choosing a bet per line, a number of lines and the coin value they wish to choose.

The piñata symbol is the wild icon of this game. It can replace any of the other Mexican condiments that appear on the reels in order to help players create a winning combination of symbols. Players can also trigger the Higher or Lower bonus round by getting 3 Mexican Hut symbols on the reels of the game.